What can schools do to reduce pupils’ prejudice?

Part one of this blog described how children as young as three display prejudice and presented a series of research findings regarding how children might develop this prejudice.

The research challenged my assumptions about children’s prejudice and left me concerned: if children become racially biased so young, partly through observing adults’ unconscious behaviour, how can we reduce prejudice?

This blog will examine what research can tell us about how to tackle these issues, highlighting the importance of taking an evidence-led approach to reducing prejudice, since some well-intentioned activities may in fact exacerbate rather than diminish negative attitudes.

Multicultural education involves explicitly teaching about the history and culture of specific groups. This could include events that specifically celebrate other cultures or groups, for example, ‘Black History Month’ and ‘Gypsy, Roma and Traveller (GRT) history month’. The intention is to increase all pupils’ knowledge and understanding of different groups by ‘including’ them in curricula.

However, there are issues with this approach. As discussed in part one of this series of blogs, one mechanism in the development of prejudice is the manner in which adults draw attention, either implicitly or explicitly, to certain categorisations. Levy et al. argue that multicultural education ‘may increase the likelihood that children will place individuals in to rigid categories, thereby…increasing stereotypes.’

Initiatives such as Black History Month and GRT History Month could be particularly problematic as they can feel tokenistic in nature and perhaps reflect an approach in which multiculturalism sits in a specific part of the timetable rather than being embedded throughout school culture and the curriculum. A few months ago, during my research on the under-representation of GRT pupils in higher education (for Kings College London), a young Romany Gypsy told me about her experience of school. She explained that although her school celebrated GRT history month, they made no mention of the hundreds of thousands of Gypsies murdered in the Holocaust when covering this topic. This shows that ‘one off’ events which focus on multicultural education do not necessarily translate into a multicultural and inclusive curriculum. Indeed, they may even lead to a sense that including other cultures is something to be ‘ticked off a list’ leaving pupils more isolated and less included.

Anti-racist teaching involves teaching pupils about historic and current events rooted in prejudice and discrimination, such as the Holocaust or the Slave Trade. Topics are taught with an explicit focus on how structural prejudice and racism caused or supported such events.

After the lessons, ‘European American’ children who learnt about racism held more positive and less negative attitudes towards African Americans compared to the control group. The researchers discuss that learning about racism can potentially reduce prejudice as it provides an alternative explanation (i.e. discrimination) for the social status inequalities which children are frequently aware of. This avoids them hypothesising that a particular group tends to have lower status or poorer outcomes due to some inherent or biological trait.

However, some researchers argue that anti-racist teaching could lead to an increased emphasis on ‘ingroups’ and ‘outgroups’ or feelings of ‘anger or self-righteousness.’ Furthermore, such sessions could prove humiliating for members of the minority group being discussed. Others suggest that learning about discrimination experienced by all members of a particular group could encourage children to view members of that group as highly similar rather than internally diverse. This is problematic because viewing group members as highly similar (a sense that ‘they’re all the same’) has been linked to higher prejudice.

Understanding historical and current racism and discrimination is important part of accepting that racial prejudice exists and working to reduce it but it’s clear these topics need to be handled with care. Levy et al. proposes that these negative side effects could be mitigated by:

Jane Elliot’s 1968 controversial ‘classroom experiment’ is sometimes considered an example of empathy training. Elliot, a third grade (year 4) teacher in Iowa, divided her class into blue eyed and brown eyed children. At first, she made the brown-eyed children the ‘superior’ group, favouring those children and pointing out mistakes and weaknesses of the blue-eyed ‘inferior’ group. The next week the roles were reversed. The aim was to give the children the experience of being discriminated against. Elliot noted that the blue-eyed children were less cruel in their role as the ‘superior’ group, perhaps because they had experienced being ‘oppressed’ beforehand and therefore felt more empathy for the other group. Though we can draw only limited conclusions from this uncontrolled, small-scale ‘experiment’, it does illustrate how this type of exercise, where people experience discrimination themselves, could potentially develop empathy and make people less likely to be prejudiced towards others in the future. A 1973 study, replicated Elliot’s experiment, splitting children into ‘yellow’ and ‘green’ groups and found some evidence that this type of role play had an effect on prejudice and intergroup behaviour. The class that took part in the activity had less prejudiced beliefs and were more likely to be willing to spend time with a group of other race children than the control group who did not experience the activity.

A multitude of ‘empathy training’ experiments have built on these ideas and have found that we can enhance empathy with training. In turn, increased empathy is linked to ‘prosocial’ behaviour. When people read about another person’s experience of being discriminated against under instructions to ‘imagine how the person feels’, their empathy scores increase and prejudice scores decrease. Those in the control group who read the same material but are not instructed to empathise do not change their scores as much. This suggests that incorporating elements of empathy training during multicultural or anti-racist education could increase empathy and reduce prejudice. For instance, when learning about the civil rights movement teachers could encourage pupils to consider and imagine the feelings of Black people who experienced institutionalised racism and inequality in the US during that time.

There is also evidence that co-operative learning: bringing different groups together to work on a project, can increase perspective taking and thus, empathy. The ‘Jigsaw classroom’ technique involves children of different races, classes, gender or nationality working together co-operatively on academic projects. Studies have found that over 8 weeks, the empathy scores of children in ‘Jigsaw classrooms’ increased and intergroup relationships improved. This type of purposeful grouping can be replicated in almost any classroom as long as there is some diversity among pupils.

Researchers believe that fostering genuine relationships with members of ‘outgroups’ and thus taking part in the ‘cultural activities’ of another group can reduce implicit bias.

‘Contact’ with other groups has long been shown to improve intergroup attitudes. White American college students that are placed with Black American roommates show reduced implicit bias for example.

In 2013, researchers investigated whether this contact and social connectedness with others leading to sharing in cultural activities could reduce prejudice. In the experiment, participants took part in a pre-study survey, seemingly unrelated to the later experiment in which they reported five ‘idiosyncratic interests’ such as their favourite book. In the main experiment, participants took part in a conversation with a Latina American ‘undercover’ researcher who posed as another participant, and the researchers manipulated two conditions: 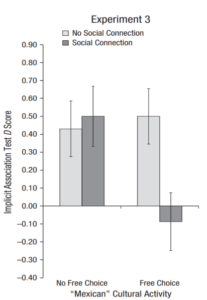 The study found that only condition 1, where participants felt a social connection and were free to choose whether they participated in a cultural activity, reduced participants’ implicit racial bias against Latino Americans. For this group, effects on interest in Mexican cultural activities and attitudes toward immigrants maintained at a 6 month follow up. The results of this study demonstrate the potential benefits of arranging for pupils to take part in minority group cultural activities. However, it also creates some important stipulations:

Despite many advances in equal rights during the past century, in recent months divisions in society feel evermore apparent. As a result, many schools are redoubling their efforts to create an inclusive culture and reduce prejudice. However, in doing so, they should draw on the wealth of evidence on how best to do this. Only then can they avoid some of the potential pitfalls.

Our Social cohesion report and our report for 3FF: ’The role of Intercultural education in schools and communities’, present further insights and examples on how to create a whole school culture which fosters inclusion and how encouraging pupils of different backgrounds to interact builds understanding between groups.