New research by CfEY and UCL featured in The Times

The Times has reported on new analysis by UCL’s Institute of Education and The Centre for Education and Youth, highlighting our call for a radical new approach to school league tables that could provide fairer ranking for schools and more reliable information for parents. 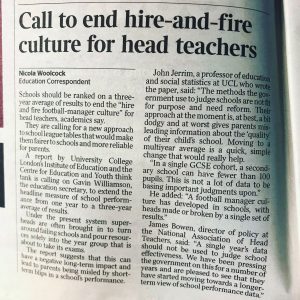 The analysis by Professor John Jerrim of UCL’s Institute of Education and Loic Menzies, Chief Executive of The Centre for Education and Youth, calls on the next Secretary of State for Education to switch the headline measure of school performance in England to a three-year average of pupils’ progress.

They argue this will end the “hire and fire, football-manager culture for school leaders,” and avoid parents being misled by short-term blips in school performance.

“The methods the government currently use to judge schools are not fit for purpose and need reform.  Their approach at the moment is, at best, ‘a bit dodgy’ and at worst gives parents misleading information about the ‘quality’ of their child’s school. Moving to a multi-year average is a quick, simple change that would really help.”

“Our research with teachers, parents and pupils has evidenced a tendency to hot-house exam groups in pursuit of short term boosts to school performance. Our proposals would give Head teachers the breathing space they need to do what’s right for their pupils whilst providing the more reliable information that parents and policy makers need to hold schools to account.”

The Centre for Education and Youth first made its call for three year averages in its 2017 report “Testing the Water”, in association with Pearson. Similar proposals have been made by the National Association of Head Teachers (NAHT) as well as the Headteachers’ roundtable.