How will industrial action impact on teachers? 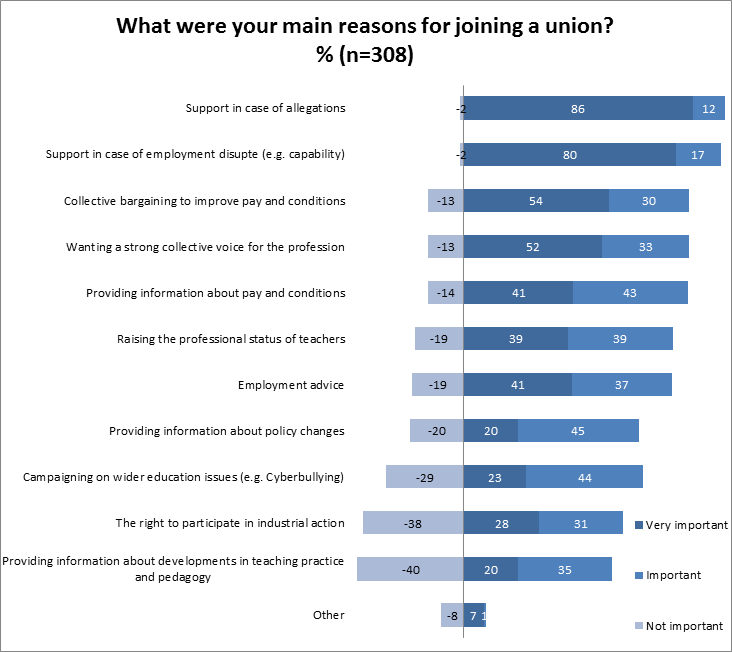 In carrying out our research, we were very surprised to find that teachers described the right to industrial action as one of the least important reasons why they joined a union. We found that over a third said it was unimportant (and that’s from a sample of teachers which was skewed towards teachers from the left-hand-side of the political spectrum with strong views on unions).
However, the importance teachers accorded to the right to industrial action varied substantially from union to union and NUT and NASUWT respondents (those who today agreed to go on strike) were most likely to consider it important. 80% of NUT respondents said they considered industrial action important compared to 61% of teachers across the different unions. This suggests that even if turnout was only 27% in the ballot, the union’s decision seems to be fairly well aligned to the views of its members. Whilst some teachers argue that unions should merge in order to provide a strong united front, the fact that teachers’ attitudes to striking varied so much indicates that this would be a bad idea.

Given the events of the last year, both in terms of coalition policies and union industrial action, our research also revealed shifting ground. Almost half of teachers who responded to our survey had changed their views on unions over the course of the last year. In some cases this was because they were pleased to see unions “speaking out” against Gove’s attempts to “destroy education”, echoing Christine Blower, NUT General secretary’s claim that teachers were left with “no option” but to strike. A quarter of teachers therefore developed more positive views on unions and in some cases, actively engaged in unionism for the first time. One Head explained that:
‘I’m not normally a militant person but I went on strike for the first time in November over the pension’s issue’

In other cases, teachers were frustrated by what they saw as union ‘intransigence’ and ‘militancy’ and a quarter (24%) therefore developed more negative views. Amongst NUT and NASUWT members this figure was 21%.

Another thing that took us by surprise was that teachers were much more likely to move between unions than we had expected. It seems that strikes were a major driving force behind this in both directions. On one hand, some teachers changed because they wanted their union to take a more proactive stance explaining that:
‘When I was a trainee teacher… I joined PAT (now called Voice) because I thought striking would harm pupils. However, when I started teaching I realised that the government was abusing teacher professionalism so joined the NUT and went on strike. I felt that the couple of days I spent striking in my entire career…. would be less harmful to my pupils than a demoralised teacher’
Others moved for the opposite reason and some even left unions altogether. One had apparently ‘changed every time the union I was a member of asked me to carry out industrial action’. Detractors from industrial action like these may partly account for the fact that a quarter of the teachers we surveyed said they would prefer not to be in a union if alternative support were available.
These two teachers exemplify two contrasting views. Chris Keates of the NASUWT, has described an ‘inextricable link between teachers’ pay and working conditions and the provision of high quality education.’ Therefore, according to this view, what’s in the interest of teachers is in the interest of pupils. It’s a perspective that one of my friends rightly criticised me for under-representing in a piece I wrote for the TES back in February. In my article I treated ‘industrial unionism’ as ‘teacher focused’ and opposed to pupil and teacher focused ‘reform unionism’, rather than recognising that pupils might also be beneficiaries of industrial unionism.
The contrasting view, frequently promoted by the government, is that strikes are harmful to vulnerable families and pupils. For some teachers, fear that the public would share this view was a real concern. They felt that strikes made teachers seem self-interested and were ‘alienating the public’. As one teacher put it:
‘I don’t personally believe we should feel pressured to compromise the experience of students for our own specific and selfish gain’
That said, this danger is hardly lost on the unions themselves. Commenting on our research, Russell Hobby, General Secretary of the NAHT argued that:
‘Modern unions will need to reinvent themselves to remain relevant: as well as providing protection for members in times of trouble, the time has come to take a leading role in raising the status of the profession’
Finally, as far as head teachers were concerned, it would be a mistake to suggest that industrial action will necessarily cause widespread acrimony and tension between management and teachers. Our research showed that around three-quarters of heads were satisfied with their interactions with unions. Nonetheless, strikes were the issue over which head teachers and unions most frequently interacted in the last year.
• You can buy a copy of our full report on Amazon here
• Or read more about it here
• You can also download the full report and data here
• LKMco’s report was funded by edapt who aim to provide teachers with greater choice over how they source some of the services provided by unions. To find out more please visit www.edapt.org.uk.