Measuring Wellbeing and the Potential for Democratic Engagement

At their best, wellbeing measures are created in consultation with communities who identify ‘domains’ that impact on their wellbeing. Canada’s Wellbeing Index is made up of eight domains: Education, Living Standards, Community Vitality, Democratic Engagement, Health, Time Use, Leisure and Culture and Environment. 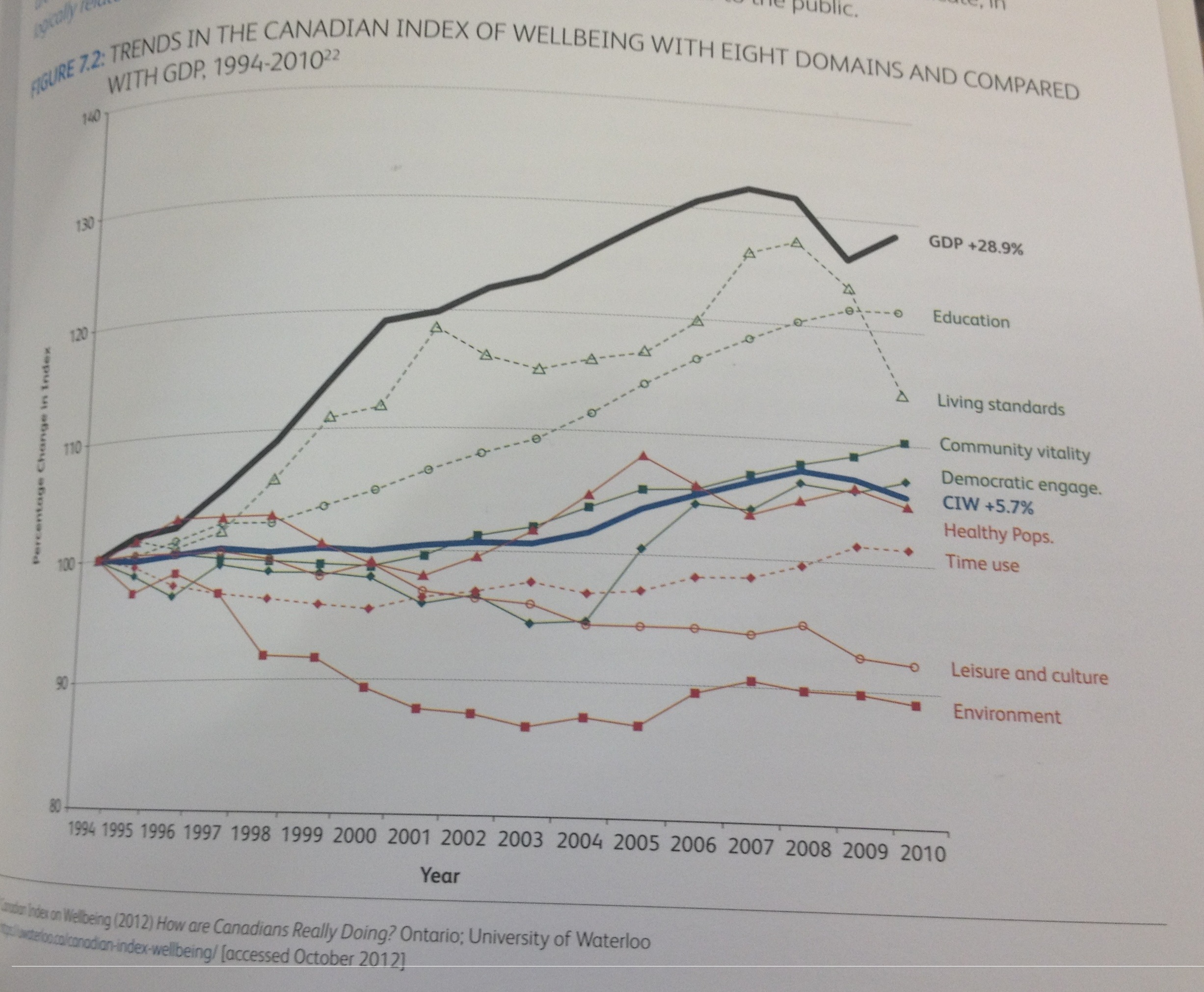 The OECD’s ‘How’s Life’ project suggests that around the world, people identify similar domains but there is some variation. For example, Israelis identify “national security” as a top priority, but that is not the case in all countries.
Today’s IPPR North and Carnegie Trust conference on measuring wellbeing showed the potential impact of high profile and good quality wellbeing measures. The conference left me wondering whether a clear framework for describing how we will promote and measure wellbeing could lead to some significant changes in our political discourse by providing clear direction, mobilising democratic engagement and supporting the development of efficient and impactful policy.
Direction:
As voters become less ideological, they are left voting for nebulous or narrow goals such as “reducing the deficit”, “One Nation(ism?)” or “The Big Society.” Scotland has a National Performance Framework – “Scotland Performs” which sets out where the country is going on a double sided sheet of A4; it seems to me that if politicians came to elections with a framework like this, voters would know what their politicians were aiming to achieve and be armed with explicitly stated measures for holding them to account.
The Scottish National Performance Framework describes the government’s purpose as “creating a more successful country, with opportunities for all of Scotland to flourish, through increasing sustainable economic growth.”  This is admittedly broad and unspecific but is then broken down into seven targets: Growth, productivity, participation, population, solidarity, cohesion and sustainability. Five strategic objectives are then stated (Wealthier/fairer, smarter, healthier, safer and stronger, and greener) and success criteria and indicators are set out.

This approach reflects some of the methodology I described in my Guardian article on how charities can measure attitudinal change. We use this approach when helping youth-organisations and charities like “3FF“ assess their impact and plan for improvement. It is also the approach we use when in our own impact assessment. 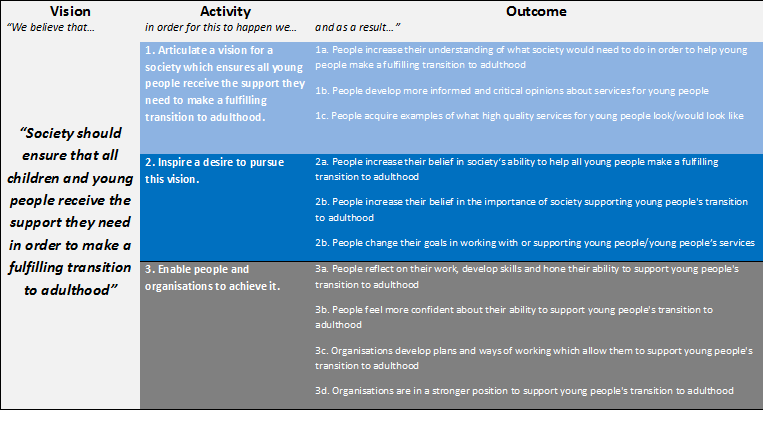 LKMco’s “Raison d’Etre” document on which we base our impact measurement.
In some ways the Scottish framework also reminds me of the Every Child Matters framework, which, whether you agreed with its contents or not, went a long way towards painting a picture of what we aimed to achieve for young people and which could be built into processes like Ofsted inspections.
Mobilising democratic engagement:
Organisations and governments work towards what is measured and the public and media put pressure on standards in the outcomes that are measured. This can have a distortive impact if measures are too narrow (as is the case for C-D borderline pupils). However, it can also be harnessed for good. For example, the DfE has vastly increased the range of information available on school performance in order that schools address a range of factors that matter (such as “narrowing the gap”).
One of the aims of the Canadian index is that it provides people with information about the things that matter to them so they can mobilise, hold the government to account and advocate based on solid information. Countries and jurisdictions which use wellbeing frameworks tied into stated aims for society, can provide “state of the nation” information in clear, accessible and high profile ways. Toronto has taken this one step further with a “Vital Signs” website which allows people to find out about projects linked to the domains they care most about. They can then translate their preferences into support for local civic organisations and volunteering.
Developing efficient and impactful policies:
We need solid data that measures ‘what matters’ to people if we are to evaluate whether policies are achieving their goals. Richer data on wellbeing also makes it possible to analyse correlations and variations. Most frameworks make it clear that wellbeing measures should be used alongside GDP rather than replacing it. However, if GDP is not the only thing that matters to people and it is as much a means to an end, then policy making that is only directed towards increasing GDP is not always the most efficient way of achieving people’s ultimate goals. Indeed, this year’s Canadian index showed that a recovery in GDP was failing to translate into an increase in people’s wellbeing.
Analysing wellbeing measures can reveal groups within society that are suffering from un-equitable distributions within particular domains. In some cases it is also possible to carry out natural experiments and randomised control trials to see how effective different policies are.  In the City of Somerville (Massachusetts), this led to surprises in terms of which council services contributed to wellbeing: for example, factors like having plenty of trees around had a surprisingly large impact on wellbeing. If rich and consistent data is not available, the factors that most efficiently impact on the things that matter to people can go unnoticed.
Ultimately, providing the public with high quality wellbeing data and placing maximisation of these measures at the heart of policy could offer a way of re-engaging people in democracy in a way that is structured around what matters to them whilst ensuring policy is directed towards ultimate ends rather than distortively over-emphasing the intermediary goal of GDP. I welcome the fact that the ONS is developing these measures but hope that government will not leave the findings at the periphery of policy making.
Measuring what matters is also important to us and that includes how our blogs impact on you.
That’s why we’re running a quick impact survey.
It’ll take you 2 minutes and is seriously important to us. Please fill it in here!
You can find out more about the frameworks and ideas discussed at The Carnegie Trust and IPPR-North’s Measuring Wellbeing Conference in the reports “More than GDP- Measuring What Matters” and “Shifting the Dial from Wellbeing Measures to Policy Practice”