Surely the Department of Education are doing some things right, I thought. All that skill in the DfE, all the human resource and political mandate, they must be cooking up some useful policies, my brain said. This was not expected. I wondered for a moment if my mind had drank the Coalition kool-aid but the thought niggled on: Some Coalition policies must be good. They must! But which ones?

A few hours later, at the suggestion of @teachingofsci, I put together a list of Coalition education policies and asked people to mark which ones they ‘broadly agreed’ with. Two days later and it had 181 responses, with 64 people taking time to explain their answers further in an open-text box. That so many people bothered to complete it was surprising and shows the appetite among the public for having their opinions heard about policy matters. 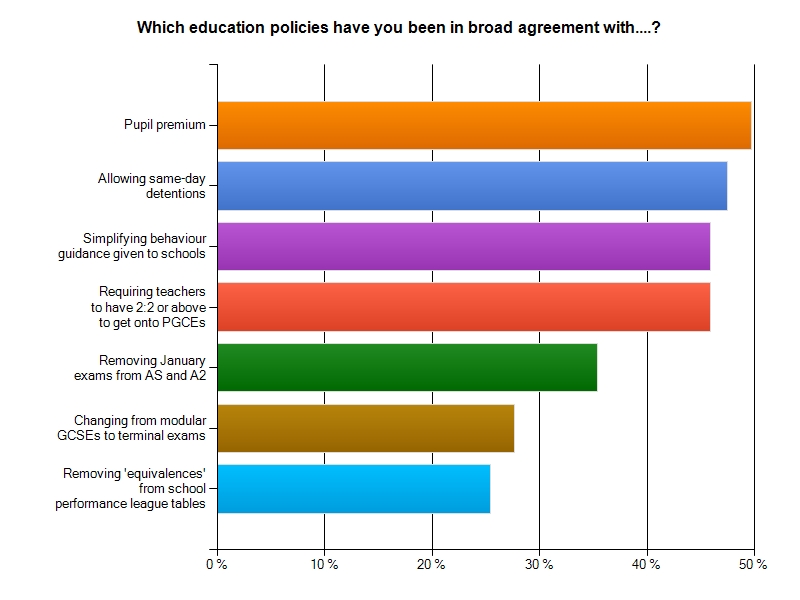 Fifty percent of people broadly agreed with the Pupil Premium, giving it the highest approval rating of all policies. Given public scepticism about any education change, a 50% approval rate seems decent, though some commentors raised the fact that while the pupil premium helps students who need it most, the extra cash barely covers the shortfalls in overall school budgets.. 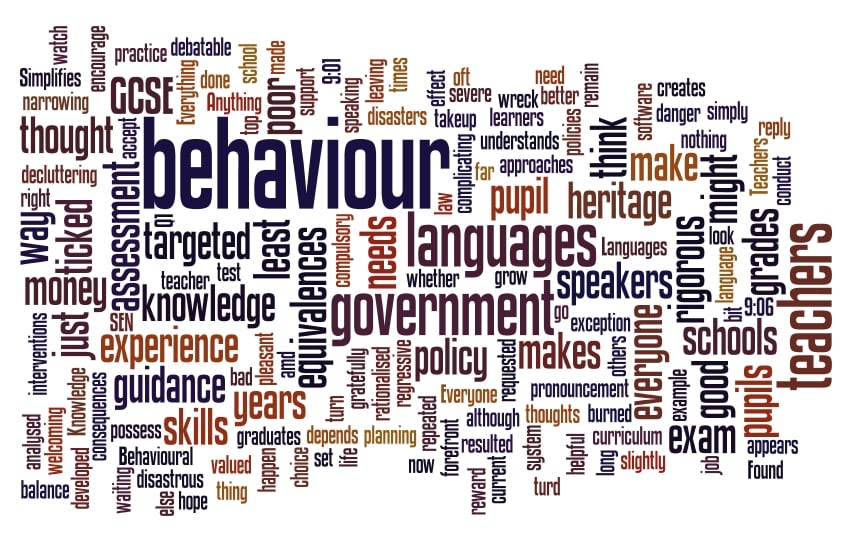 Half of all respondents agreed with Gove’s move to cut prescription on behaviour and to allow same-day detentions.The most frequent theme in extended commentaries was support for behaviour changes (see right: wordle of the open text responses), with many people explaining that simplifications on the guidance were crucial. Respondents also talked of the importance of the behaviour issue and how appreciative they were that it wasn’t being yet again ignored by governments. On the downside one commentor noted: “Short same-day detentions have been allowed for a long time. This is just window dressing.”

Gove’s “rigour” policies, including requiring trainee teachers to have 2:2s and getting rid of modularised exams, were also highly approved. People who explained why they liked the end to modulars said it was because they appreciated having “more learning time rather than exams” not, as Gove suggests, because it makes exams tougher.

A quarter of respondents were pleased about the removal of equivalences from league tables though a number of commentors complained that the straightforward removal of anything other than GCSEs lacked nuance when several alternative qualifications were, in fact, quite rigorous. Government moves to start allowing alternative qualifications into league tables if they meet strict quality criteria is likely to be met with glee by these respondents.

In the end it seems people like policies that: give resources to the most vulnerable students, simplify guidance, provide more time for learning, and give discretion to teachers for dealing with behavior. 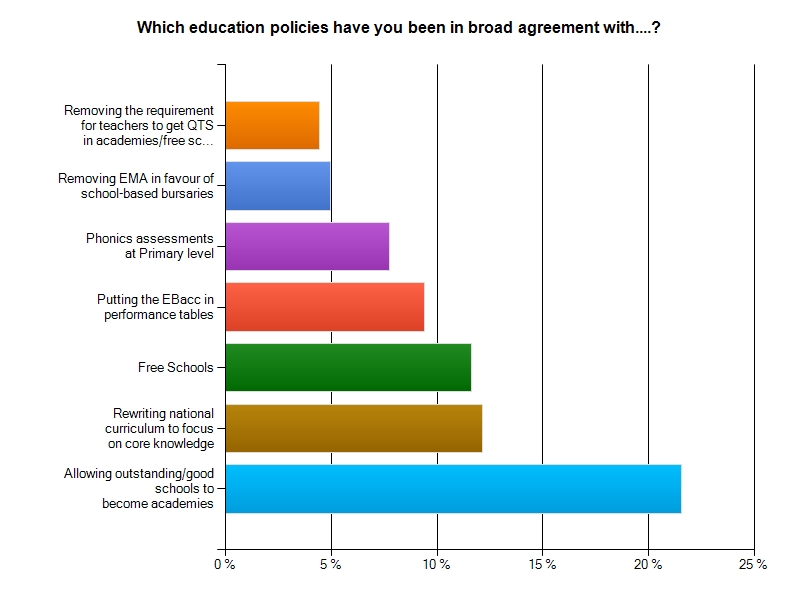 Given that people so like the pupil premium and the requirement for trainee teachers to have 2:2s, it is little wonder that the most disliked policies were the scrapping of EMA and the lifting of the requirement for Academy & Free School teachers to pass a teaching qualification.  In fact, it becomes difficult to understand how one government can end up with both sets of policies – they are almost mirror opposites!

The EBacc and the National Curriculum rewrite also received low approval ratings (less than 12%). This might be surprising given that people were happy to approve other policies said to provide ‘more rigour’ however several respondents pointed out that given academies and Free Schools no longer need to follow the curriculum so its re-write was largely pointless.

Academy conversion had fairly (though not hideously) low agreement at 22%,but the way I wrote the question wasn’t helpful. Several respondents said they didn’t like the academies policy because they felt all schools should be able to convert and see the benefits. Indeed, a feeling of inequality pervaded all the comments about academies and free schools.

Free School approval was much lower than for academies (12% compared to 22%) however when people did approve of Free Schools they were more likely to explain their reason than for any other policy. One commentor wrote in depth about how in their local area there had been a lack of non-religious comprehensive schools until a Free School came along and therefore, while they could see overall issues with the policy, it was solving some problems.

Policies that help all schools, or the most needy pupils, seem much more popular than those helping the already-successful or the merely sharp-elbowed.

This was an anonymous survey circulated among (mostly) educators on Twitter, our Facebook and through our LKMCo pages, it is not ‘The Truth’ of what teachers think. But everyone who took part had to agree with at least one principle for them to be counted in the results, so these scores reflect people who are willing to accept at least some policies and not people characterized as lefty crazies hell-bent on kicking Gove.

The differences between the most and least popular policies are stark:  One in two people agreed with behavior policies, only one in 20 agreed with scrapping EMA. One in four agreed with removing equivalences from the league table, but less than one in ten agreed the Ebacc be added. People want rigour, and teacher autonomy, but they don’t like arbitrariness. Commentors often quipped that they liked ideas but strongly disliked the way they were implemented. As one respondent wrote: “I support a few of these policies…but I hate how they are introduced via leaks and rushed out”.

Changing education is difficult but it is even more difficult if you don’t listen to the people involved in implementing your policies. People want policies that: give to the most needy, provide autonomy and simplicity for all, that set rigorous expectations about qualifications taken by both students and teachers,and that are logically consistent. It’s not, at all, a ridiculous ask and politicians ignore at their peril.