Sometimes it takes a fresh voice to break through the debate

“Time and again, policy makers have failed to listen to our voice” – a frequent complaint from teachers? Yes, but this time it comes from a different quarter: young people themselves. Whilst pupil voice has been criticised recently, a new Pearsons/Teach First report shows that young people can take a well-considered and critical approach to education policy and that they should be listened to, not as oracles of wisdom setting the agenda, but as another set of stakeholders who deserve to be participants in the debate. The report, released today and entitled “My Education” lays out the views of over 8,000 young people from a series of debates and a Populus poll of over 2000 13-21 year olds. Highlights include insights into what makes a good teacher (not just ‘fun and friendly’) and calls for greater support to help pupils achieve their aspirations.

Critics argue that asking pupils what they think will just lead to a proliferation of videos, ipads and ‘dodgy progressive’ learning. However, the report shows that young people are able to combine different approaches in a refreshingly balanced way. Take these comments from Chadley Atkins aged 16, describing a physics lesson from an astrophysicist with a PhD:

“He explained what seemed the most impossible learning objective ever…the full life cycle of a star. Amplifying his voice, he sailed us through from birth ‘til death. We listened acutely, gripped by what we were being introduced to. To finish, he showed us an unbelievable video of a supernova – a crescendo to his symphony. The best was yet to come. After inspiring us, our raging questions were endless. But he did not simply reply, he used the class’s knowledge with his guidance to reach the answer. None of us thought we’d be capable of this just 50 minutes before. 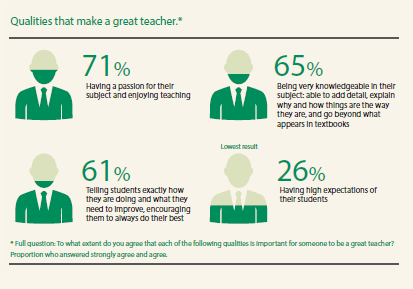 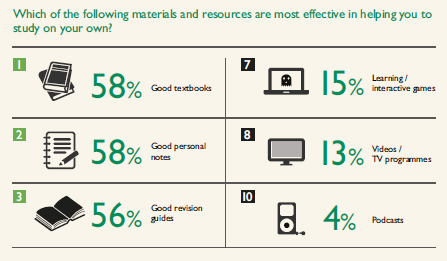 So what was great was the amazing teacher talk which hooked pupils in with a fact-heavy narrative. This was complimented by appropriate use of a video. He then guided pupils towards the answers, helping them work it out for themselves (facilitating?) In other words, he got that balance right, using his extensive wisdom to hone his delivery.

In terms of resources, pupils were not all begging for ipads and videos either. They rated textbooks, revision guides and notes far more highly than interactive games and podcasts.

The other key factor in making a good teacher great was rapport and relationship building. One pupil described a teacher who helped her through her exams:

“I don’t know so much that it was the extra revision that helped me, as much as knowing this teacher believed in me and genuinely cared. I believe a lot of my determination then came from making myself, my family, and this teacher, proud of my accomplishments on results day.”

One of pupils’ most resounding calls was for teachers to spend more time getting to know them and understanding their needs and ambitions. As one pupil put it, ‘we don’t share, they don’t ask. They don’t ask and we don’t tell’

“Pupils seemed frustrated by knowing what they wanted to do with their lives, but not knowing how to get there. Most had an appetite for skills that would help them navigate the employment path. They wanted to learn more about getting a job, managing money, paying for university, different languages and cultures, and generic work skills”.

This argument has strong echoes of my Joseph Rowntree Foundation report  which showed pupils do not suffer from a poverty of aspirations. Instead, and as ‘My Education’ explains, young people are able to ‘speak easily and specifically about what they want to do with their lives, what they struggle with is how to keep their aspirations on track’.

I agree that teachers need to build rapport so that they can help pupils achieve their goals but the report’s authors are wrong to infer that teaching should therefore be ‘relevant’ to their goals. One pupil complains that ‘the school says we have to do all these subjects that don’t really help,’ and, ‘I don’t see how subjects are relevant to my career aspirations.’ This approach is based on an instrumental view of education with which I fundamentally disagree, furthermore, education is there to expand pupils’ horizons, not to play to their existing ones. On top of that, the pupils in ‘My Education’ are forgetting that what they want to do (and are able to do) will change over time. But then, ultimately, this brings us back to the fact that pupil voice involves engaging in this kind of debate with young people. It’s why I welcome the since it invites young people into the policy debate, rather than ignoring them… or taking their views as gospel.

Click here to see a visualisation of the report

You can read more about the report and download it here