“Every school – whatever its intake and wherever it is located – is responsible for educating children and young people who will live and work in a country which is diverse in terms of cultures, religions or beliefs, ethnicities and social backgrounds” 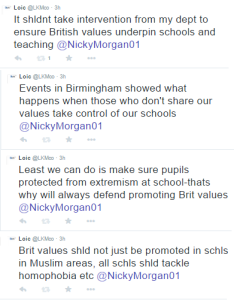 Tonight’s speech by Nicky Morgan at London’s exclusive Carlton club was big on British Values, but she was at pains to emphasise that this wasn’t just about defending young people from extremism in “predominantly Muslim communities;” it was about promoting British values of tolerance across the UK, for example by combating homophobia in more ethnically homogenous/rural areas (as SexYOUality – where I’m a trustee, do) and enabling young people to “understand and respect the differences that make our country unique” and “making them into citizens who respect difference, who welcome disagreement and who challenge intolerance.”.

In fact, what Morgan described seemed to be most importantly about “working towards a society in which there is a common vision and sense of belonging by all communities”.

Sound familiar? That’s because it’s a quote taken not from Morgan’s address but a 2006 speech by Alan Johnson (then Secretary of State for education and skills). Meanwhile this blog’s opening quote comes from the then-DCSF’s guidance on the duty to promote community cohesion – aside from the rhetoric and terminology, it’s frequently tricky to tell the new from the old. 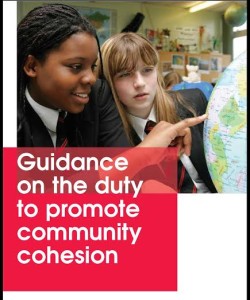 The duty to promote community cohesion was introduced as part of the 2006 Education and Inspections Act. However, whilst schools are still legally bound by it, the coalition removed the requirement for Ofsted to report on how schools were doing, arguing that “the government’s inspection reforms are aimed at increasing the impact that inspection has on raising standards and improving provision for all pupils.”

It was a controversial move. A parliamentary amendment to maintain Ofsted’s duty was only defeated in the Lords by 181 votes to 141 and David Blunkett warned that:

“Withdrawing an emphasis on community cohesion sends entirely the wrong signal, not only in education, but more broadly to society as a whole. An emphasis on community cohesion in schools enables pupils to understand the differences between cultures and backgrounds. It also demonstrated the role of schools as key drivers of functioning, safe and vibrant neighbourhoods.“

However, it took the highly politicised uproar around the so called ‘Trojan horse’ controversy for issues of cohesion, tolerance and diversity to fly back up the priority list and for ‘British Values’ to appear as an element of Spiritual, Moral, Social and Cultural Development (which forms part of the judgment on leadership and management). High profile inspections and failures have followed with teachers and pupils invariably caught up in the ensuing turmoil.

Amidst the swings of the political barometer, the similarities between the old community cohesion framework and British values guidance are easy to spot: 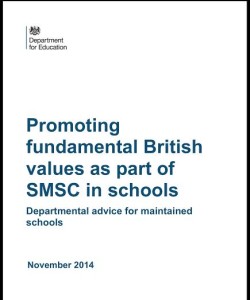 In fact, the biggest difference between ‘British Values’ and ‘Community Cohesion’ is probably not one of content, but which section of the electorate is being appealed to; in the run up to the election, ‘community cohesion’ no doubt sounds uncomfortably wooly and liberal compared to the far more UKIP friendly ‘British Values’.

However, whilst British Values may make electoral sense, playing politics with inspection only makes life harder for teachers and pupils. If Morgan’s professed commitment to reducing teacher work-load is to ring true, the government needs to stop prioritising electoral posturing over a stable and sensible accountability framework. One can only hope that the DfE’s soon-to-be-published response to the workload survey makes such a commitment.