Are teachers able to put in effort where it matters?

Over the past two blog posts in this series we have looked at the premises in Sam Freedman’s blog on standards, asking whether we can be sure they are correct. The first blog considered whether children really are happier and the second blog dug a little deeper into how we judge academic standards and whether it is true that they have failed to improve. For the purposes of this third blog we are going to assume both premises are correct because if they are, Sam poses an interesting question:

But here’s the puzzle: given the improvements in behaviour; the reduction in criminality; the falls in truancy; the increase in aspiration; the improvements in home lives – all of which are known to link to academic attainment – why haven’t we seen a commensurate, observable, rise in academic standards?

What possible answers are there to this conundrum?

1. The link between these improvements and academic attainment is weak.

Sam argues that these non-cognitive improvements are, “known to link to academic attainment” but is this necessarily the case?

A 2013 literature review by the IOE and EEF published by the Cabinet Office entitled “The impact of non-cognitive skills on outcomes for young people” concludes “the causal relationship between non-cognitive skills and later outcomes is not well established”. The review essentially outlines the classic correlation/causation debacle (99% of convicted criminals ate bread in the week before committing their offence – we must stop these awful bakers ruining people’s life chances!) The evidence of a causal relationship is strongest when looking at things like children’s belief in their ability (good stuff for the growth mindset fans) however there is no evidence that things like leadership, coping skills and most relevantly to this blog, their engagement with school cause better academic outcomes. It’s also worth noting that part of the reason there’s no evidence is that it’s still a developing area.

2. Teachers aren’t able to put effort in where it matters

Could we be doing something wrong in schools that means we aren’t capitalising on the happier, more sensible kids we’re getting?

It may be the case that while the improvements Sam highlights in things like a reduction in bullying and trying alcohol have provided more fertile ground for achievement, other factors have got in the way of teachers capitalising on this and translating opportunity into achievement. For example, we know that league tables and accountability mechanisms based in GCSE achievement create an arguably disproportionate incentive to focus on year 11 pupils more than anyone else, and this may have created the disconnect Sam highlights. Alternatively, we could find the answer in the results of the recent workload challenge – it may be that the activities teachers spend their time on are not in fact the ones that translate into higher achievement.

Most secondary schools aim to ensure as many kids as possible pass their GCSEs with a C grade or higher, because of the impact this has on the school’s Ofsted grade, their league table positions, and of course the positive benefits for children themselves of having good qualifications. However this has a number of unintended consequences.

It is often the case that most of the effort in schools goes into year 11 pupils, with less invested at KS3. The work going in at year 11 is necessarily targeted at passing the exam, and what gets you a C grade may not be the same as what gets you a good pass in PISA, or indeed builds the skills you need to carry a subject on to University. This conclusion might be backed up by the graph in Professor Robert Coe’s inaugural lecture, showing that tests on our kids at 10 and 11 seem to do ok, but at 14 and 15 they take a nose dive. 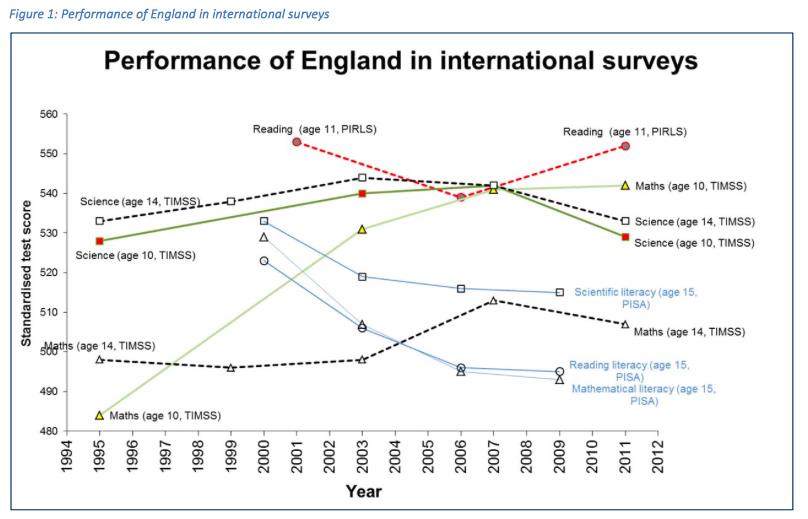 Added to the investment schools put into pupils, is the investment parents make themselves in the form of tutors.14% of young people in LSYPE2 also had private tutoring (in London, this rises to 24%). This tuition is mainly in maths and English. Since these pupils are currently in Year 9, this suggests a lot of educational investment is taking place in pupils well before their GCSE examinations.

The other thing we know we haven’t got quite on top of is teacher workload. The latest DfE consultation through the Workload Challenge Survey had more than 44,000 responses. The DfE reported results in the TES from the survey, stating: “The average English teacher works nearly 50 hours a week, but too much of that time is taken up with unnecessary paperwork and unproductive tasks.” A 2014 NUT survey on teacher workload found similarly disheartening results, with teachers cracking under the burden of an excessive workload and contemplating leaving the profession entirely.

It seems that teachers do not have enough time to do those activities most relevant to improving academic standards – planning and preparing excellent lessons, and assessing the progress of their students in a useful way. Time previously devoted to teaching and learning is increasingly being taken up by data input, detailed book marking, meetings, and preparing for Ofsted inspections. It could be argued that these are useful and important activities, but do they lead to the improvements in academic standards that we are hoping for? And are they as effective in improving academic standards as the direct act of teaching excellent lessons and challenging learners to achieve more?

Could this explain Sam’s standards puzzle? Could it be that teachers are having difficulties converting improvements in children’s well-being into genuine academic improvements due to the disproportionate effort they spend prepping year 11s for exams, and generating mountains of paperwork demonstrating their impact in case Ofsted comes calling? Teachers are the vital link between children and academic outcomes, but they haven’t yet been considered. They could be the missing link in the standards puzzle.