I actually think measuring progress accurately at Primary school is a very important thing to do. I don’t want Primary schools to be measured by attainment alone, as that’s mainly just judging their intake, as I said before. And if we’re going to try to measure progress, we need an accurate, sensible and fair baseline, which has shown itself to be a strong predictor of future attainment.

When I spoke to Jan Dubiel from Early Excellence as part of my research into the new reception baselines, he told me about a piece of work he had been part of that looked at how accurately the Early Years Foundation Stage Profile (FSP) predicted outcomes at KS1 and KS2. I couldn’t find it online, so asked the DfE, who provided me with an FFT development paper after a Freedom of Information Request.

The FFT paper shows that there was a statistically significant correlation between several elements of the FSP and outcomes at KS1/2. 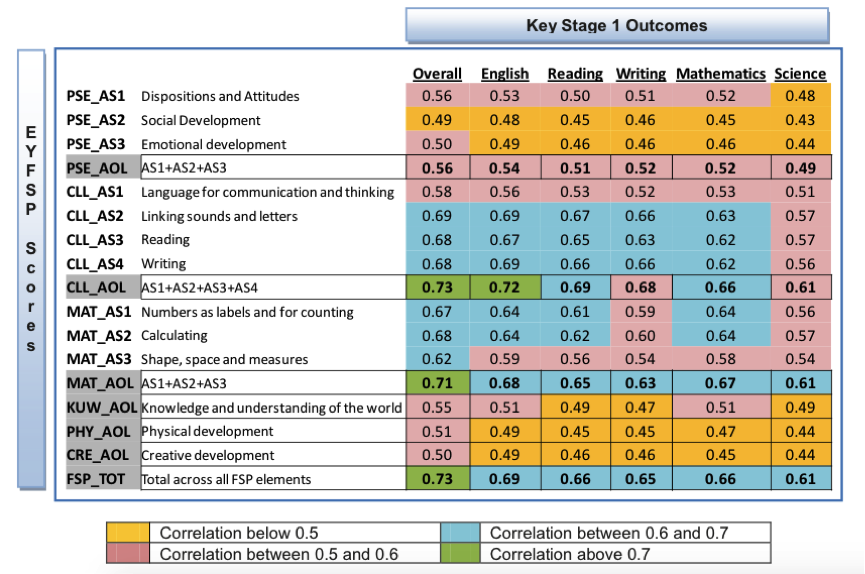 When looking at this, bear in mind that this research was done in 2010, before a number of changes were made to the FSP (for example, it now has 17 Early Learning Goals (ELGs) instead of 13 areas of learning, and each of those goals is judged on a scale of 1-3 instead of 0-9). The first cohort who were assessed on the new FSP will reach the end of KS1 this summer. I have no idea if anyone is planning to look at the predictive power of the new FSP (I’d imagine having a greater range of goals would contribute positively, and a small range upon which they are judged would not).

Looking at it made me wonder: if elements from the FSP can be used to produce statistically significant predictions, why not just use those elements as a baseline, avoiding many of the issues I wrote about in my last blog? Of course the FSP is done at the end of reception, so you could only judge progress from year 1 to year 6 (leaving reception out of it, as nursery currently is) or alternatively you could introduce a baseline FSP done at the start of reception (which I don’t think would be a huge change, given that most EY practitioners do assessments along these lines anyway to help them with planning).

The FFT paper concludes that:

“Simplistic models, such as those using a single EYFSP overall or individual element provided lower levels of accuracy and were not felt to be sufficiently reliable”

They go on to explain how their model’s accuracy improved if they included Personal, Social and Emotional elements from the FSP. If the FFT are right, I wonder why the DfE baseline requirements are that the formal assessment measures only language, literacy and mathematics? Most of the approved providers have optional sections on PSE, recognising that teacher and parents in the EY value this element, and that it would be useful for them to have ways to assess, measure and report on it. However, as far as I’m aware, only Early Excellence include PSE in the part of the baseline that provides the single, scaled score for DfE and accountability purposes. Could the DfE’s vision for a baseline that focuses solely on language, literacy and numeracy accurately be described as a “simplistic model… using a single EYFSP overall or individual element”? Why, given the findings above, have the DfE chosen to exclude elements of PSE from the baseline? It may be that there is other research that I’m unaware of making this study an outlier which can sensibly be ignored (and again, I’d love to hear from anyone who knows more than I do!)

The FFT paper also found the inclusion of PSE improved the consistency of their model, particularly for pupils with the lowest 20% of overall FSP scores. The paper doesn’t say how much better the model becomes, or make any suggestions as to why, but if it’s significant, it makes the DfE’s failure to include it even more peculiar…