Video games improve educational attainment but the crucial question is ‘Why?’

New research has found a direct relationship between video games and educational performance. An Australian study found that students who played video games scored more highly in maths, reading and science tests. The study also found that students who spend time on social media perform less well, indicating that the relationship is not simply related to ‘online time’ but potentially something specific to gaming itself. So why would playing video games – a pastime with a bad reputation for increasing violence or antisocial behaviour, have a positive effect on educational attainment? So far, our understanding of the causality of the relationship is poor however there are some interesting theories as to why it exists which may even point to a causal relationship

The recent Australian study found that students who played online video games from a few times a month up to everyday scored significantly higher in reading, maths and science PISA tests, which are specifically designed to test students’ understanding and their ability to apply learning to real life problems. 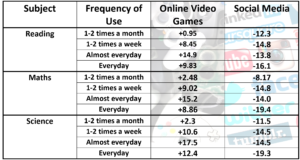 However, the research has not proven a causal relationship between gaming and education and various other factors could affect the interaction, for example, academically capable children may tend to be more likely to enjoy video games than their peers who are less academic. Yet there are four main reasons for believing there could be an underlying causal relationship:The study also showed that whilst playing video games everyday was linked to better attainment the improvement was less than that for gaming ‘almost everyday’, suggesting that some gaming can be beneficial but that excessive gaming can be detrimental to education, possibly because of the time cost of gaming every day resulting in lost study time.

Combining this latest Australian study with previous research raises the possibility that there could indeed be a causal relationship between video games and educational attainment. If future research can prove a causal link, and more importantly, improve our understanding of the link, it could have widespread implications for education, parenting and the future reputation of video games.