Around the country, schools-within-schools, educate or guard the challenged and challenging. Sometimes they’re called ‘inclusion units’, sometimes ‘exclusion units’, sometimes more zappily ‘learning zones’. In one school I knew (let’s call it Oakwood), it was across the road, staffed by teachers considered hard-core enough to manage the toughest of the tough. I’ve often discussed with Oakwood’s head how her unit could better serve the school. Those debates came straight back to me at today’s fascinating mini-conference “Is Inclusion Over?” organised by Not Dead Fish.

The problem for many of these ‘units’ is that they suffer from an unhelpful conflation of purposes. I would like to argue that disentangling these would improve the situation for everyone.

In Oakwood’s case, the ‘unit’ was in constant tension between two purposes:

Both of those might have a place but they are incompatible.

Kiran Gill, highlighted exactly the sort of thing we might want from specialist provision within schools. She was recently awarded a grant by the Inclusion Trust to start work with the IPPR on a new programme that would support pupils at risk of exclusion. She explained that pupils struggling to cope within the mainstream tend to have complex needs that will not go away simply by punishing them. She pointed out that excluded pupils are twice as likely to be care leavers, four times more likely to have been born in poverty and seven out of ten of them have special needs or a mental health problem. 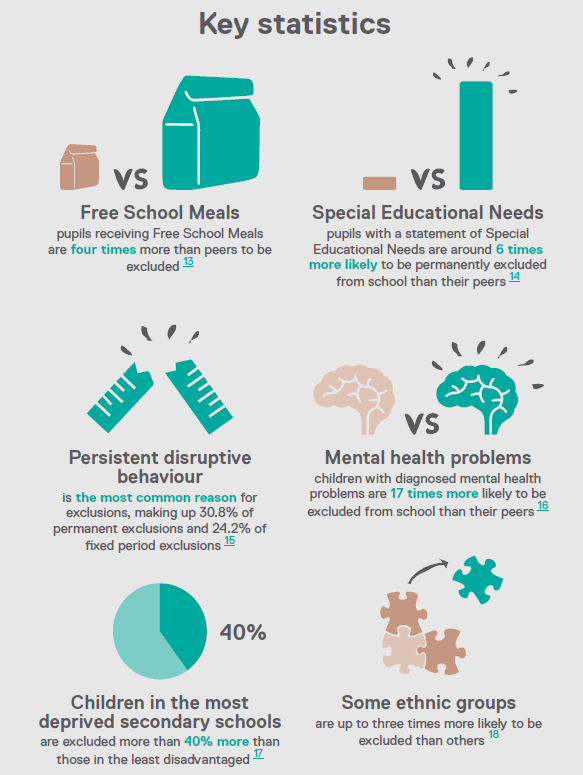 Figures from our 2015 report “The Alternative Should Not be Inferior“

If we are to address these pupils’ needs, we need to ensure they have access to the best support, including specialist provision and close partnership with Child and Adolescent Mental Health Services (CAMHS). Yet, as we argued in our recent Joseph Rowntree Foundation report, it is often only once they are excluded that pupils can access the funding and support they need. By this time they have been ‘pushed out’ of our education system and gone down the (often) one-way street of exclusion. Our report, and the charity’s “anti-poverty Strategy” therefore argued that funding and support should come earlier, when the road between inclusion and exclusion remains a two-way one. This is important because if support can be accessed within ‘normal’ schools, pupils benefit from a far more porous boundary between ‘units’ and mainstream lessons.

So why wasn’t the ‘inclusion unit’ approach possible at Oakwood? Several reasons. Firstly because ‘going to the unit’ was supposed to be a behaviour management ‘stick’ and it could therefore not become a desirable option; a child kicked out of class for persistent disruption, could not be seen to go straight to a place of nurture for the rest of the day.  Secondly, because some pupils were only there for very short periods, there was no continuity. Identifying and responding to pupils’ needs is a long-term process and staff need to be able to plan for progression and reintegration carefully. With pupils constantly coming in and out for hours, days, weeks or terms this was tricky and the smaller core of pupils who were there long-term got caught in the cross-fire.

A better approach can therefore be found in schools that have both a short term ‘isolation’ unit as well as an inclusion or specialist unit. Of course there will quite rightly be movement between the two; pupils who continuously find themselves in isolation tend to be those who are in need of support. However, overall, the approach means schools can do two essential jobs: they can tightly manage behaviour with an appropriate system of carrots and sticks, whilst simultaneously providing the specialist support that many pupils need in a nurturing environment.

My final contention is that perhaps, if schools and other agencies got the nurture piece right, the need for the stick might finally drop away a bit too, but that’s a longer game.

Catch up on our ‘Pushed Out Learners’ report here.