Today’s report from the Children’s Society on young people’s well-being is essential reading. It is thoroughly researched, robust and insightful. Below I summarise six of the report’s most interesting findings.

There have been significant drops in young people’s happiness with their lives since around 2009 but this comes on the back of significant increases in the preceding decade. However past gains have now been lost and we are now back to where we were in the mid 1990s with no sign of improvement.

Something scary is going on with how young people, and in particular girls (shown in green) feel about their appearance.  These trends are very different to those in other domains such as satisfaction with school.

Girls’ happiness in relation to appearance is plummeting, and whilst in the mid 2000s, the gender gap was closing, there is now a gaping rift between boys’ and girls’ feelings about their appearance.

Anyone working with young people needs to be very much alive to this since like it or not, it’s a big determinant of young people’s life satisfaction (see point 6). 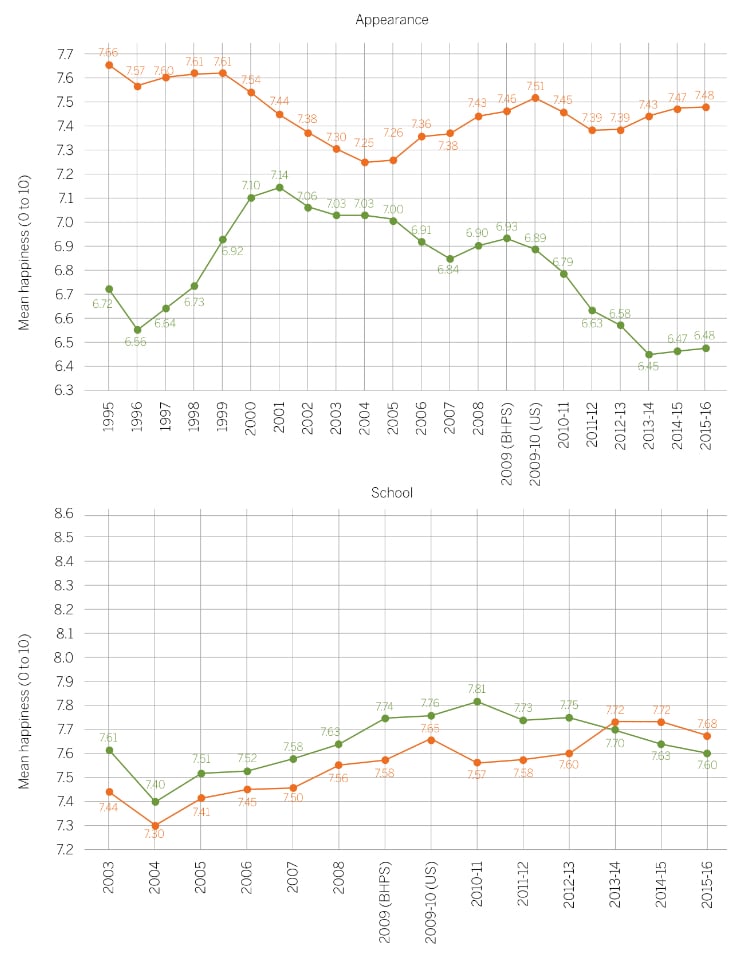 Helpfully, the report shows evidence of links between happiness with appearance and things like comments/jokes about sexual activity and pictures/videos of bodies. Trends for girls are striking, however I’m not sure what’s going on with the U shaped curve for boys…? 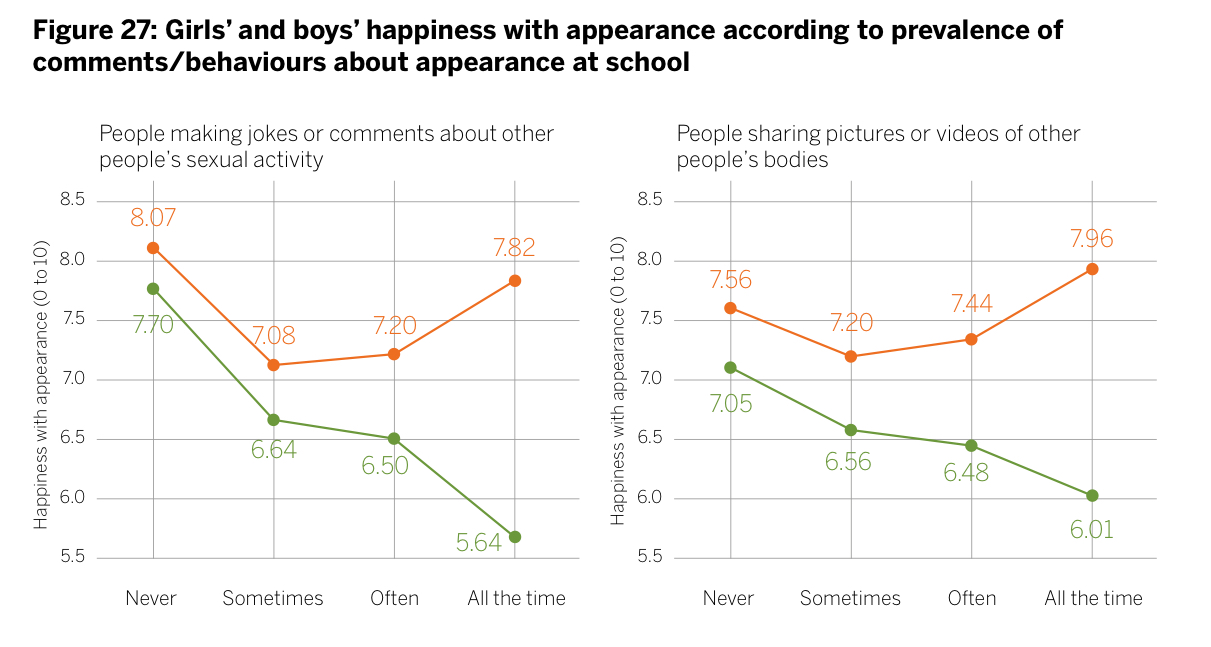 Comments from girls reveal an intractable lose-lose dilemma when it comes to everyday decisions about how they present themselves. 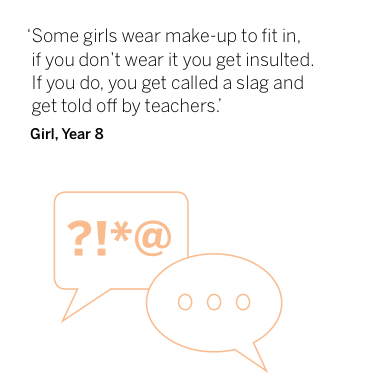 3. Satisfaction with school is not falling

Many fear that recent shifts towards a more demanding, academic and less ‘child-centred’ curriculum are resulting in unhappy children – it was a frequently raised concern in our recent report on Schools and Mental Health for example. However, it appears that satisfaction with school and school-work is in fact relatively high at the moment and has been on the rise since 2004. 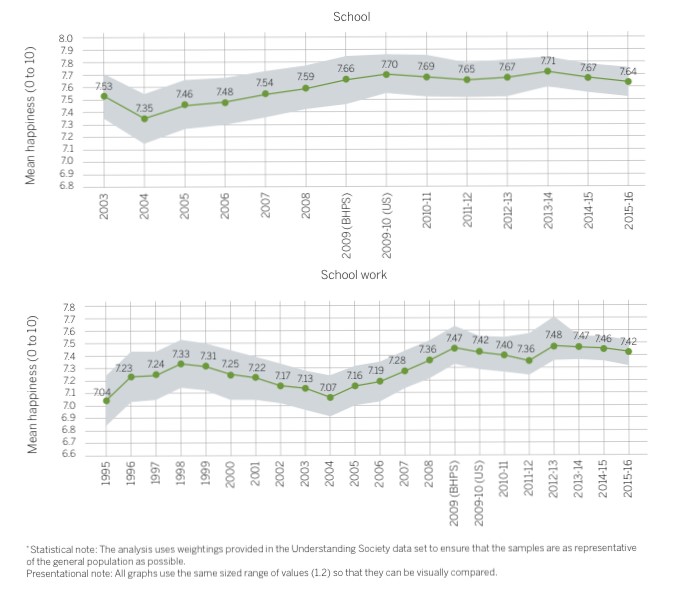 4. Income is closely linked to well-being

DfE policy over the last decade has been hugely focused on gaps between rich and poor students but this has almost exclusively targeted the ‘attainment gap’. 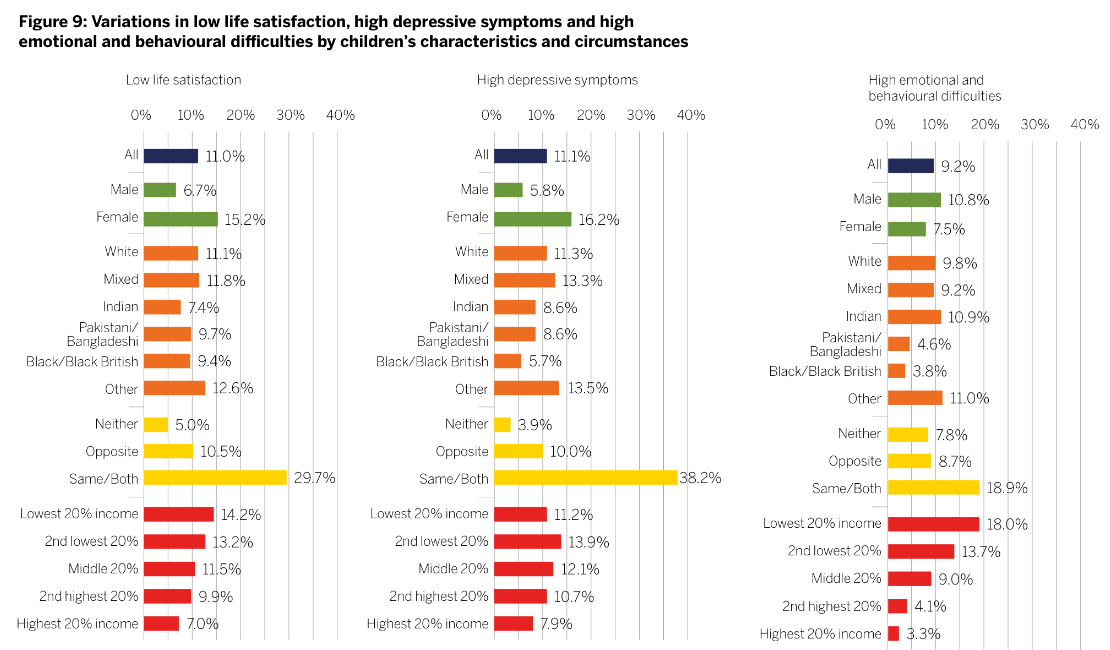 I’m surprised and cautiously pleased to see that the issues raised in our mental health report about mental health provision in BAME communities do not necessarily seem to be translating into overall low wellbeing among young people from ethnic minorities. However, when it comes to sexuality things are far more worrying…

5.Despite many improvements in the school environment for LGBT+ young people, the situation remains desperate. 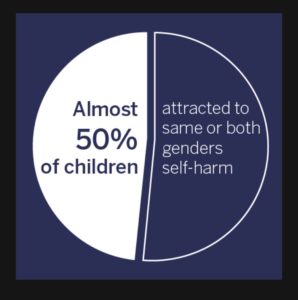 What I found more surprising though was that 12% reported not being attracted to either gender. Furthermore, these young people seemed to be consistently happier! 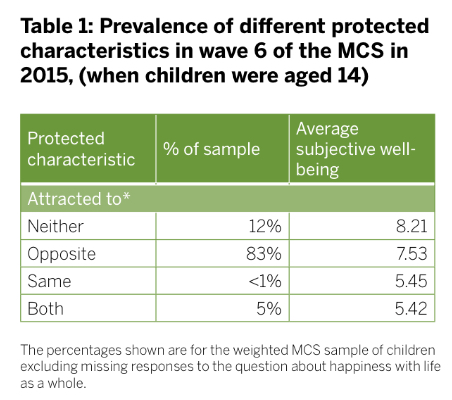 6 . Happiness is not an intangible unknown

One of the most useful things about today’s report is its detailed and analytical approach to well-being.

Firstly, it presents the following summary of different conceptions of well-being. 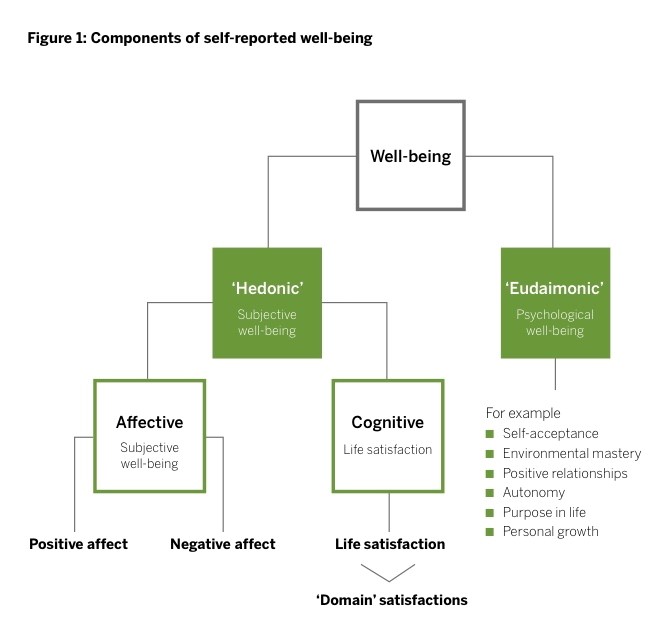 The report points out that:

“a single question on subjective well-being answered by a child is a stronger predictor of self-harm than 20 questions about emotional and behavioural difficulties answered by their parent (or carer)”.

Thirdly, the report begins to break down the relationship between different factors and life satisfaction. 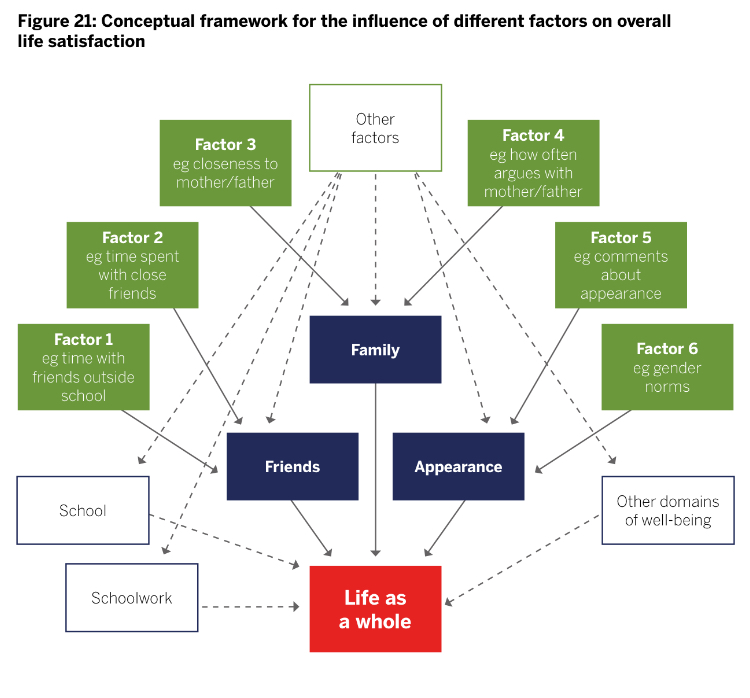 Analysis suggests that family and appearance are key (of course, causality could go in either direction). Meanwhile, 21.4% of the variation in young people’s satisfaction with family can be explained by a child’s closeness to their mother, how much they argued with their mother, how close they felt to their father and how much they argued with their father. 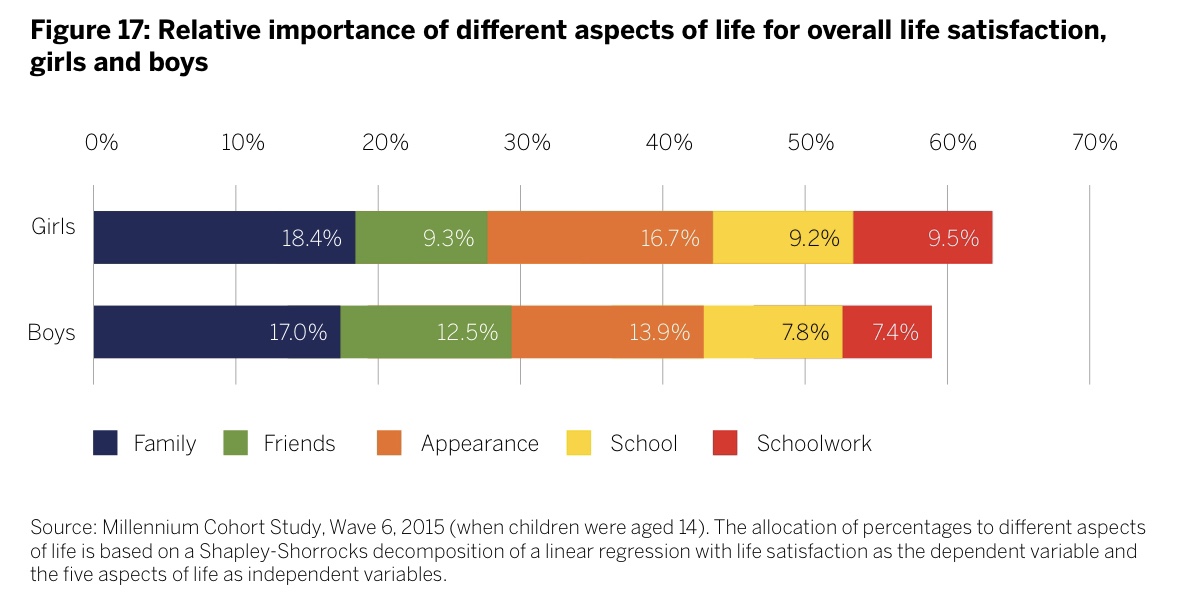 Looking more closely at different activities and high or low levels of well-being, it seems links between some activities (such as truancy) are much stronger than others (such as physical activity).

Young people were also asked what characteristics mattered to their friends. 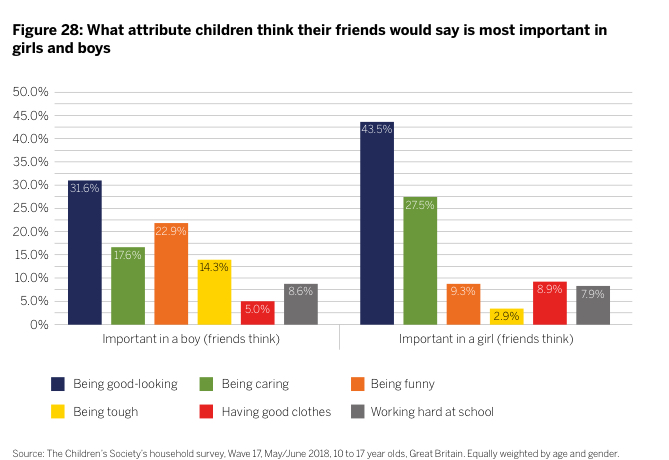 All in all, today’s report should encourage those working with young people to use evidence to ensure they make the best possible contribution to ensuring all children have happy childhoods. It also provides valuable tools for those running interventions or programmes seeking to improve well-being – it is a complex area, but one in which there is a wealth of evidence and research which can all be used to work more effectively.