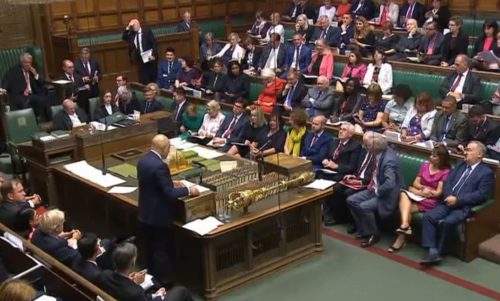 The last fortnight has been a whirlwind for British politics. As the Brexit chaos becomes increasingly frenzied you could easily be forgiven for losing track of the latest in education policy, so LKMco has produced a round up of some of the recent developments to keep you up to date.

Last week, a leaked briefing document picked up by the press divulged a raft of policy proposals for the education system. They included a much-needed funding boost for provision across the sector, as well as guidance on behaviour and changes to Ofsted’s monitoring of schools.

The leak was followed by an announcement from the Department of Education which confirmed some of the changes and announced a “giant cash boost” of “over £14 billion in primary and secondary education between now and 2022/23”. Schools will receive an additional £2.6 billion for 2020/21, £4.8 billion for 2021/22, and £7.1 billion for 2022/23. The cash is much needed in schools and the changes should take spending per pupil back to around the level it was in 2009-10. However, the Chancellor has rightly faced scepticism about promising such largesse at a time of financial uncertainty.

The plans include a pay increase for teachers, with starting salaries to rise to £30,000 by 2022 and an additional £4.4 billion over the three years set aside to cover rising pension costs. Currently, nearly a quarter of all teachers are paid under the £30,000 threshold, according to the Department for Education’s School Workforce statistics for 2018. While this hike in pay for new teachers may sound like a powerful move to tackle to ongoing struggle of recruitment and retention, our research has suggested that pay may not be the best lever to use.

Our ‘Why Teach’ report from October 2015 found that only around half of the teachers surveyed said that pay was an important reason for going into and staying in a career in teaching, while wanting to ‘make a difference to pupils’ lives’ scored over 90%.

Although it is possible that higher starting salaries may entice more people into trying the profession, without tackling the workload burden this change may simply result in more rapid churn in the workforce, as new teachers continue to find it tough to stay for the long haul.

On the other hand, teacher pay is likely to have fallen further behind other professions since our 2015 report and as Sam Sims at Datalab has shown, it seems the shift in pay could create a considerable and tempting pay premium in many subjects.

The government has also earmarked £700 million specifically for pupils with special educational needs and disabilities (SEND) and on Friday, announced a “major review” of the system. The plans come just five years after the new Children and Families Act 2014 was introduced to “offer simpler, improved and consistent help” for children with SEND. We highlighted the fragmented implementation of SEND changes in our 2015 report “Joining the Dots”, and have since worked on a range of other challenges within the SEND system. Bart and Loic have therefore recommended 5 key areas for the review to focus on and a number of much needed changes.

Higher starting salaries may entice more people into teaching, but without tackling the workload burden this change may simply mean more rapid churn in the workforce Click To Tweet

FE gets a look in

The announcement also included a £400 million boost for sixth form and further education colleges in 2020-21, in part to support the delivery of the new T-level qualifications which will be rolled out from September 2020. The FE sector has been consistently underfunded since 2010, and this cash injection is welcome. However, given that in 2017-18 spending per secondary school pupil was £6,200, while spending per student in further education and sixth-form colleges was around £5,700 and in school sixth forms was around £5,000, the level of new funding does little to alter the perception of FE as the poor relation in education.

Beyond funding, other proposals for change included encouraging school leaders to confiscate or ban mobile phones and backing headteachers to exclude pupils. The plans caused some concern over a paragraph that promoted using “reasonable force” to “promote good behaviour” with many in the sector understandably worried about what constitutes reasonable force. The emphasis on expelling pupils is also controversial, given that permanent school exclusions have been rising since 2013. It is hard to see how these messages tie in with the recent Timpson review.

These tough talking proposals are potentially damaging for pupils with SEND too. As we pointed out in our 2016 report into the links between Poverty and SEND, excluded pupils are much more likely than others to have SEND. The government might do better to provide funding, guidance and support for heads on meeting needs of vulnerable pupils at risk of exclusion, before they increase the burden on alternative provision. Schools need to be supported to avoid excluding children with SEND, through earlier identification of need, swift administration of Education, Health and Care Plans (EHCPs), and better training around SEND for mainstream teachers. Head teachers might then feel have more alternatives. It is also high time the government implemented its long-stated commitment to ensuring schools remain proportionally accountable for the outcomes of any young person who leaves the school’s role.

The emphasis on expelling pupils is controversial, given that permanent school exclusions have been rising since 2013 Click To Tweet

Amongst the range of new policy initiatives were some plans that LKMco was especially pleased to see. Top of our list was the removal of exemptions from regular inspection for schools rated as “outstanding” by Ofsted. The move aims to give a more up-to-date reflection of school performance. A previous Schools Week investigation revealed that more than 100 schools had been ignored by Ofsted for over a decade.

LKMco has called for this policy change for years, and would go one step further in removing the top grade altogether, as our Chief Exec Loic Menzies explains in this blog.

The introduction of “ambassador schools” to “champion” flexible working is also a welcome concept. In our work with the GLA, we found that enabling teachers to fit their jobs around personal commitments through flexible working was a critical factor in improving retention and easing recruitment challenges in the capital.

We found that 77% of London teachers surveyed said that being able to fit the job around family commitments better would ‘encourage them a lot’ to remain in the profession (compared to 68% of non-London teachers), but they also expressed fears about how to make it work and whether it would negatively impact their career progression.

Flexible working therefore requires a commitment from school leaders; appropriate technology that can be used remotely; and innovative approaches to planning, preparation and assessment time.

Finally, the government plans to introduce a new leadership support programme for schools that have not been rated “good” by Ofsted for over ten years. It will offer help from experienced school leaders and encourage sharing of evidence-based good practice.

However we also need a fresh approach to attracting new leaders. We want to see more diversity in leadership positions in schools. We would like to see all staff have access to leadership training and development that does not hinge on the sponsorship or patronage of an existing senior leader. School leaders, governing bodies and boards should also receive training in inclusive recruitment and retention practices.

More research is needed on the nature and quality of existing leadership development programmes and how teachers get onto them in order to progress in their careers.

Watch this space for more from us on this topic!