This month the Education Policy Institute released a detailed report about ‘unexplained pupil exits’ from schools in England, highlighting the 10.1% of students who leave their school without the paper trail or oversight that comes with either a permanent exclusion or a family decision to move school. In this blog we look specifically at which pupils are affected, providing a summary of the key findings around the characteristics of pupils who leave a school for unexplained reasons. 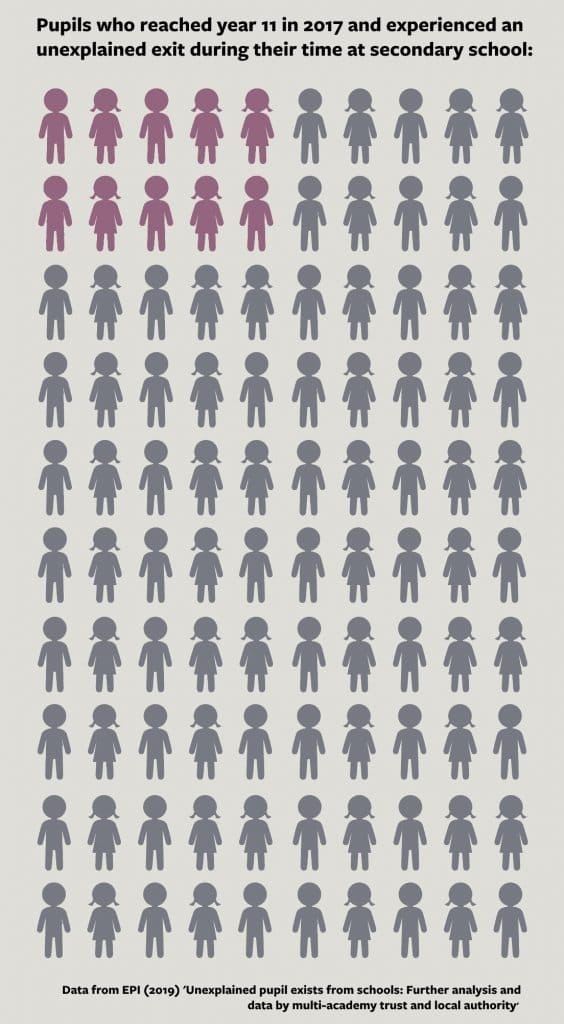 The research uses an adapted version of the methodology used in EPI’s April report in order to show the scale of the issue more accurately. ‘Unexplained exits’ are defined as “exits from a school to either another school, alternative provision or an unknown destination, where those exits do not appear to be driven by families or a formal exclusion”. It is likely that many of these exits are driven by ‘off-rolling’ or similar practices where students are ‘pushed out’ due to their behaviour or predicted attainment. The data in this report tracks pupils within the cohort who reached year 11 in 2017.

Other students identified by the research as being more likely to experience an unexplained exit from school were: 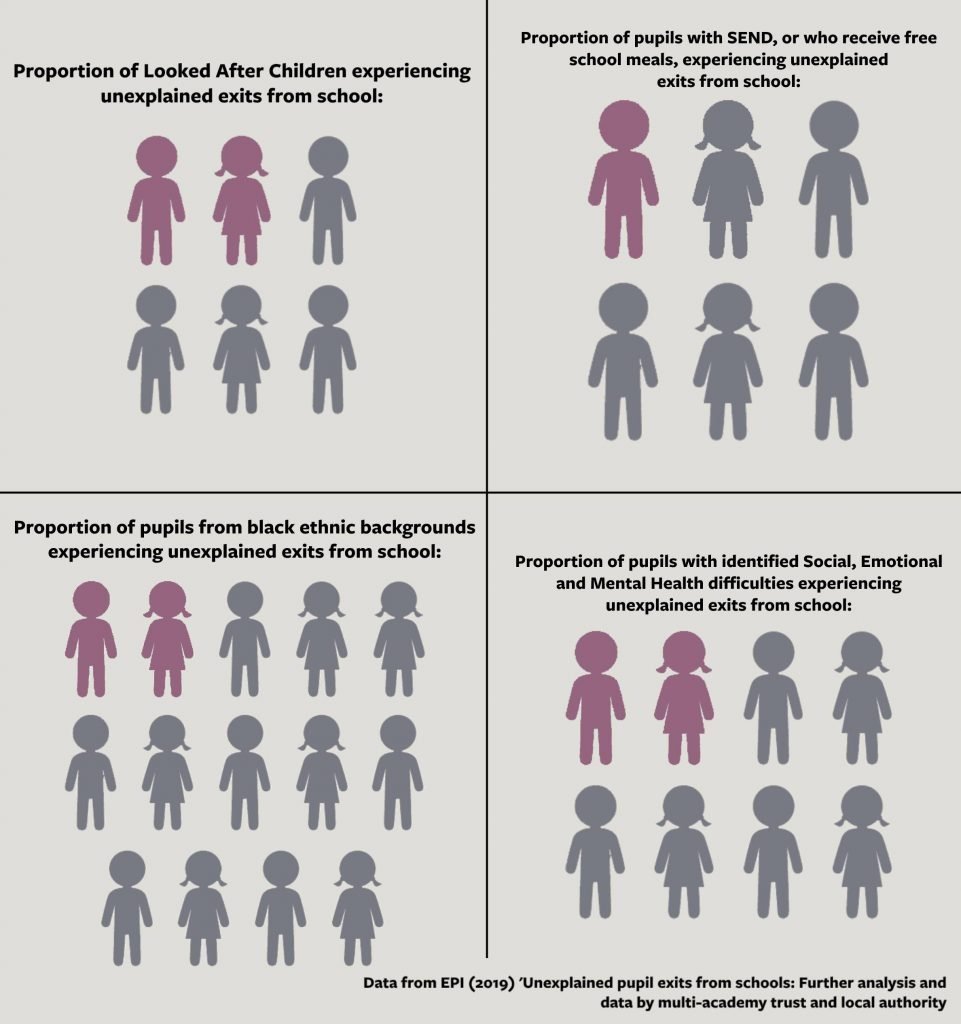 We are ‘losing’ our most vulnerable young people

Worryingly, half of all unexplained exits are to ‘unknown destinations’. For 51.9% of pupils who left their original school, no place of education was identified in the term after leaving.

For some pupils, an unexplained exit may be used to provide that student with a place in Alternative Provision (AP), hoping that the extra support available in these settings will facilitate a transition back to mainstream school. However, out of the young people who experienced an unexplained exit and were placed into AP, only 10.1% were recorded as being back in mainstream education in year 11. Just 4.4% of all pupils who left their school for an unknown reason were back in their original school by the end of year 11, suggesting that for most students, these exits are permanent.

Less than 5% of all pupils who left their school for an unknown reason were back in their original school by the end of year 11, suggesting that for most students, these exits are permanent Click To Tweet

When schools work with APs to support their pupils in returning, going back to school can be a positive move. Mills and Thompson’s research on effective AP identifies factors that make reintegration successful: academic continuity, parental support, a key worker, and specialist support.

The diagram below from Mills and Thompson’s report shows systems used by schools to support pupils returning after spending time in AP. 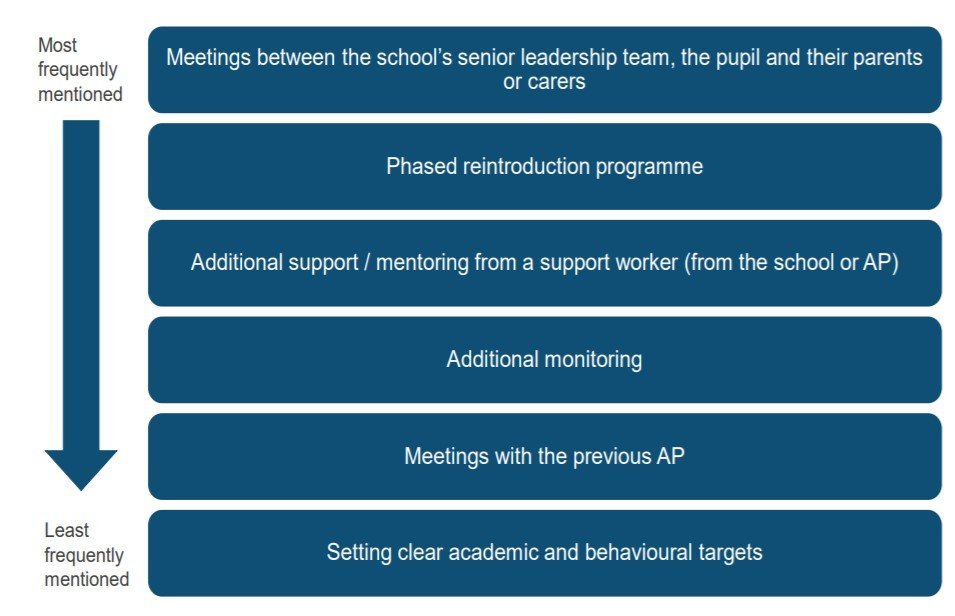 EPI addresses this, writing that while managed moves are tracked, this data is not recorded and monitored nationally in the same way as permanent exclusions. This can lead to less transparency. Managed moves require parental consent, however EPI’s research, and my own experience supporting families, found that many families feel coerced into agreeing to a move in order to avoid their child being excluded permanently.

Where are these young people going?

Four in ten students did not return to a state-funded school by year 11 after an unexplained exit. So where are these young people going and how can we ensure that they are receiving the education they need  in order to prepare for adulthood?

They could be home schooled, in unregistered provision or within an independent school, however the DfE doesn’t collect data allowing us to track these students.

For families that do not have the money to pay for education, leaving state-funded schooling is a risk. While some settings will be right for these young people, concerns have been raised about the quality and safety of some unregistered education providers.

If we don’t know where these young people are, how can we ensure that any support needs are identified or met? Click To Tweet

Poor data limits our ability to track pupils and further increases the already considerable risks they face. If we don’t know where these young people are, how can we ensure that any support needs are identified or met?

It is deeply worrying that for many of these young people, the majority of whom face marginalisation due to their identity or situation, an unexplained exit allows them to slip through the net.

Unexplained exits allow this to happen to students far too easily, without the original school being held to account for what impact this has on their future.