Throughout this week’s Conservative party conference, I waited eagerly to hear more about the proposed ‘behaviour crackdown’ in schools, outlined in a leaked Department for Education document published by the Guardian in August. While discussion and press coverage has focussed on school funding, I remain interested in seeing what will happen next to build on the suggestions for managing behaviour in schools outlined in the document, including support for:

These strategies seem to be in line with current discussions around behaviour in schools, where the popularity of schools that have adopted a strict approach to behaviour management is positioned alongside moral panic about knife crime and worsening teenage conduct.

The phrase ‘reasonable force’ has drawn particular attention, with discussions about what this means for pupils and teachers gaining traction in the media and online.

Why focus on behaviour?

We need to think carefully about where this focus on behaviour is coming from. The media and high profile education consultants tell us that behaviour is one of the biggest issues teachers face and that it plays a role in the current retention crisis.

Of course, none of this is to say that teachers do not find pupil behaviour a challenge – a recent Teacher Tapp poll highlighted that disruptive behaviour is an issue for the majority of teachers, particularly those who are relatively new to the profession. 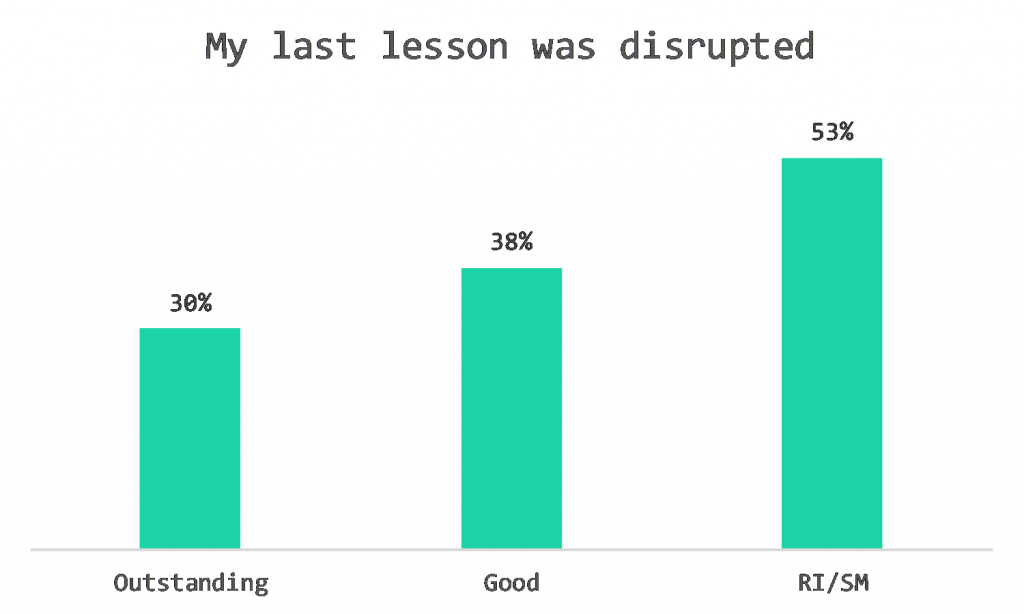 Behaviour in schools clearly impacts on learning and staff, with difficult behaviour making teaching harder. However, treating pupils as the main ‘problem’ for teachers, shifts responsibility for issues in schools onto young people and teachers rather than wider systemic issues.

Teachers are leaving the profession, and to blame out of control teenagers, naughty children and schools that are unable to ‘tackle behaviour’, rather than the pressures of government implemented cuts and accountability structures, allows the wider system to avoid major scrutiny.

Teachers are leaving the profession but let's not blame out of control teenagers, naughty children and schools that are unable to ‘tackle behaviour’. Click To Tweet

What is reasonable force and how is it used now?

There is no argument that some young people struggle to regulate their behaviour and that school staff need knowledge and training on strategies to support these students. In extreme situations, some level of restraint is appropriate to manage risk, and, while there is currently no legal definition of what level of force is ‘reasonable’, the Department for Education published guidance for school staff on use of reasonable force in 2013.

Guidance for school staff on the use of reasonable force (2013)

The discussion over the last few weeks focussed on scenarios where young people may be in physical danger or fighting, however in these situations staff should normally already be using restraint techniques to prevent harm, so what will this new policy change?

My concern is that school staff will be given more power and encouragement to use force.

It is also worth considering who force will be applied to if there is a push to use more of it within schools.

Whilst some argue that using force will maintain safety when supporting young people who display challenging or high risk behaviour, many special schools are actually rethinking their position on restraint. Many are the now considering other options for pupil safety that maintain the bodily autonomy of their young people.

Research on teacher bias has shown that students’ identity impacts on how teachers provide support or punishment for challenging behaviours. If there is a move towards more restraint and control, it is likely to be used more on vulnerable and already marginalised young people who need extra support.

If there is a move towards more restraint and control, it is likely to be used more on vulnerable and already marginalised young people who need extra support. Click To Tweet

When does force work?

In previous roles I have been trained to, and at time needed to, restrain young people. I have held back young people about to launch themselves into fights, blocked a student from the chair that they were hoping to throw at a peer and tightly held the arm of a teenager who stated their intention to step off the train platform we were stood on, into the path of the approaching train.

In each of these situations ‘reasonable force’ was needed to prevent physical harm and I had the confidence to act quickly, knowing that this was backed up by policy and training.

My concern with physically blocking, moving or restraining a young person is when it is used as an alternative to verbal de-escalation or as a way to overpower a distressed young person.

While managing a semi-independent home for Looked After Children, I once spent over an hour with a young person who had pushed their way past me into my office, a space where young people were not usually permitted to be. They were flicking between sadness at a family situation and anger directed at me. I understood that in that moment I was a physical representation of the system they felt trapped in, and over the course of the conversation they caused some damage to furniture.

Some might argue that after attempting to persuade them to leave, using physical force to remove them from the office would have been justified in order to maintain safety and boundaries, but what would that have taught this young person? That if you don’t succeed in talking someone around to your way of thinking then the next step is to physically make someone follow your wishes?

Physical size is also a factor here, I imagine a five foot tall woman is less likely to consider using force against a teenage boy than someone more closely matched in size and strength; I wonder if those promoting increased use of force would see it as such a clear solution if they were used to being at a size disadvantage. There is a risk that over-reliance on ‘reasonable force’ could send the message that if you are bigger and stronger than another person then you can make use of it, a dangerous lesson to promote.

Verbal de-escalation is not easy; it can take far longer than simply moving a person to a different space and can include having to answer tough questions or discussing difficult topics. It is mentally and emotionally draining. I also understand that I was lucky to not be on my own in a classroom full of other young people watching and waiting as I dealt with difficult situations. However, we really need to consider what messages our actions send about how people should be treated and what we do when someone is not behaving in a manner that we would like.

It doesn’t feel right to teach young people that if you are in a position of responsibility or power, you have permission to touch or move someone unless they, or those around them, are in immediate risk of harm.

We really need to consider what messages our actions send about how people should be treated and what we do when someone is not behaving in a manner that we would like. Click To Tweet

The use of reasonable force in school environments is linked to another policy trailed in August’s leaked documents – a reduction in the number of teaching assistants in schools.

Having additional members of staff available to support teachers and pupils is a key part of managing challenging behaviour; giving teachers permission to use ‘reasonable force’ in classrooms will not compensate for the lack of another supportive adult. Reducing the number of teaching assistants while also promoting increased use of force in schools is a step closer to using outdated authoritarian methods to maintain control of classes.

It may cost less to train a teacher to restrain a child than to provide funding for support staff, but de-escalation should always be prioritised before considering teaching young people that force is a reasonable response.

It may cost less to train a teacher to restrain a child than to provide funding for support staff, but de-escalation should always be prioritised before considering teaching young people that force is a reasonable response. Click To Tweet