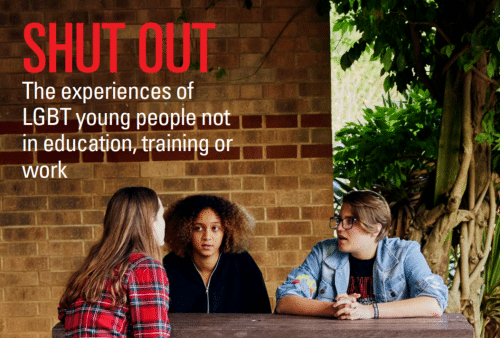 How can we reduce the risk of LGBT young people becoming NEET?

Family rejection, bullying, and a lack of tailored support are increasing the risk of LGBT young people becoming NEET, according to a new report released this week by the charity Stonewall.

Nearly 12 per cent of all 16-24-year olds in the UK – some 800,000 young people = were not in education, employment or training (NEET) between October and December last year, according to the Office for National Statistics. We know from previous studies that certain groups of young people are more likely to find themselves in this situation than others, including those who are disabled, from BAME backgrounds, or who have caring responsibilities.

Employers need to ensure they not only operate inclusive policies, but actively send out the message that they welcome and support LGBT employees Click To Tweet

I hope that Stonewall’s findings from this work will lead to LGBT young people receiving better support and guidance, which will improve their experiences of the UK education system and help them to access meaningful and sustained destinations in the future. I would especially like to see more being done in the area of mental health, which comes out of the report as one of the biggest challenges that LGBT young people are grappling with – impacting on many different areas of their lives.

As Stonewall recommends, it is vital that further training is provided to ensure that staff in schools, primary care services, sexual and reproductive health services, and mental health services understand how to meet the mental health and wellbeing needs of LGBT young people. This should include a special focus on the needs of trans young people, who face the greatest risk of suicide when compared with their LGB peers.

Alongside this, employers need to ensure they not only operate inclusive policies, but actively send out the message that they welcome and support LGBT employees. These messages should be picked up by careers advisers and flagged to young people at every opportunity. LGBT young people need to be able to see role models at school, college, university and in a wide range of industries. It is important that teachers, lecturers, counsellors and employers are all sending the same message that whatever their chosen career path, LGBT young people will be safe, included, and encouraged to achieve to their full potential.

Stonewall’s report outlined a series of changes that the LGBT young people involved in the research felt would improve their experiences and reduce their chances of becoming NEET:

Stonewall’s study identified a number of specific challenges that put LGBT young people at greater risk of becoming NEET. These take place in both education and work settings:

“A few of my friends know but I haven’t told my family [that I’m a lesbian or about my girlfriend]. I’ve been out since I was about 13/14. I’ve thought about telling my parents about it but I’m really not sure how to.”
Aisha, lesbian, 16, BAME, Scotland

“At school, the bullying was really related to me being gay…I had to have a lot of time off when I was in school because of this discrimination. When I turned 18, I just stopped going full time as I felt I had free rule.”
Aidan, gay man, 21, white, Scotland

“When I went to college, I thought I was going to be happy to be there and it would’ve made my life so much easier. But there were people who I didn’t see eye to eye with there, who made my life difficult.”
Dylan, trans man, 23, white, Wales

“I told them I was trans and they went “Hey, we don’t know how to help you with this – go look elsewhere. We’ll do what we can but this is not our paygrade, we’re sorry”.”
Rachel, trans woman, 23, white, location excluded for anonymity

In work and apprenticeships

“He was a dodgy boss. He made me feel unsafe. He was anti-LGBT, and said that if any employees were gay, he’d fire them. So I left… I felt unsafe as an LGBT person.”
Jamie, non-binary person, 19, white, England

In response to these findings, Stonewall makes a number of specific recommendations for a range of stakeholders, to help achieve the changes the young people would like to see. These are available in the full report.