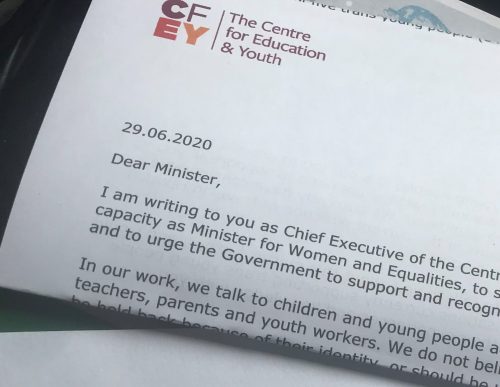 We have written to Liz Truss, Minister for Women and Equalities today to raise concerns following recent comments that we believe will have negative impact on transgender young people across the country.

At CfEY we believe that all young people should be able to make a fulfilling transition to adulthood; this must include ensuring dignity and safety for trans young people.

The letter reads as follows:

I am writing to you as Chief Executive of the Centre for Education and Youth, in your capacity as Minister for Women and Equalities, to show our support for trans equality and to urge the Government to support and recognise trans young people’s rights.

We are also concerned about the potential negative impact on trans young people that might result from reports about restricting trans people’s access to single-sex facilities, particularly when attending school and youth projects. Under the Equality Act 2010, trans people have been able to access single-sex facilities that match their gender for over a decade (except in very restricted individual circumstances), however the recent focus on toilets has resulted in trans people feeling unwelcome and unsafe using facilities. I know you will agree that trans people deserve to be safe and treated with dignity and respect.

Being transgender does not have to result in poor mental health, it is the attitudes and barriers faced by trans people that often result in these difficulties.

Before any changes are made, we should be listening to trans young people to learn more about their experiences and how changes might impact on this small, marginalised community.

As the UK’s think and action tank for young people, it is our job to provide the evidence and support that policy makers and practitioners need to support all young people to make a fulfilling transition to adulthood. We currently have considerable concerns about the potential implications of the current direction of travel in relation to trans and non-binary young people’s rights. We would welcome the opportunity to talk to you about this matter further, and would also be happy to recommend organisations currently supporting trans young people who would be very willing to share their experiences and knowledge with you.

Chief Executive, The Centre for Education and Youth