Assistive Technology – How can we make it more accessible?

Last year, The Centre for Education and Youth produced a film about vision impairment. Although I had worked with a blind pupil for a year when I was an English teacher (one of the fiercest, funniest young women I’ve ever met), I didn’t understand much about assistive technology. My pupil was confident and independent when she joined the school and there were no conversations about her classroom teachers needing to understand the equipment she used. 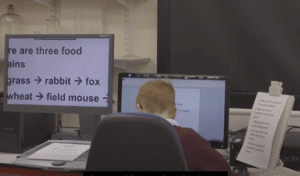 It was only when making our VI film that I started to fully appreciate the range of options that are available to support a young person whose sight is impaired. While there is a wealth of assistive technology out there, products are constantly evolving and information on what works best, when and for which young person, is comparatively scarce. In this blog I explore changes on the horizon that could boost understanding of and access to the right technology for young people who need it.

Julian Jackson, Founder and Director of social enterprise VisionBridge, wants to connect the world of eye research and technology more closely to those it aims to support. Julian coped with vision impairment as a child and went completely blind in 2010 due to an inherited retinal disorder. He made the decision to leave behind his career in sales and PR to focus on becoming an advocate for eye research and eye health, including completing a 1089 miles, 55-day ‘Big Blind Walk’ through Great Britain, which raised tens of thousands of pounds for eye research.

While there is a wealth of assistive technology out there, products are constantly evolving and information on what works best, when and for which young person, is comparatively scarce Click To Tweet

He set up VisionBridge in 2016 to improve awareness of sight loss an eye health. Julian said his journey has taught him that while the idea of sight loss touches people’s feelings, “eye research and assistive technology really confuses them”. In learning more about the latest research and assistive technologies himself, he discovered that even optometrists and opticians were struggling to keep up with what was available, let alone professionals working in other sectors.

“I think it’s incumbent on people like to me to try to find ways of educating anyone who in their career might come into contact with visually impaired and blind people,” he explained. 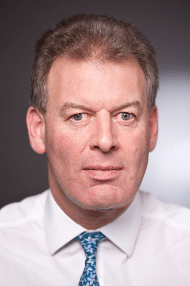 “This also of course includes teachers, who may need particular support in the learning environment.”

Around two thirds of children who have vision impairment are educated in mainstream schools, and while some of these schools have specialist learning facilities for learners with vision impairment, others do not.

During his own school days in the 60s, Julian’s partial sight meant that he had to sit right at the front of the class, often going right up to the blackboard to try to scribble down what the teacher was writing.

“There was a whole lot of peer pressure around not being able to really manage the amount of information that was being written on the board,” he said.

“My peers were racing ahead in terms of their learning, while I was struggling just to copy down information after the lessons had finished. I had no awareness and understanding of tech, the teachers certainly didn’t and my parents didn’t either. 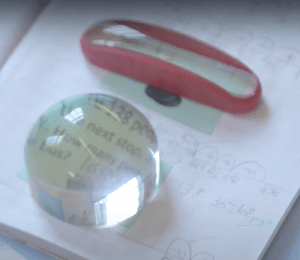 Magnifiers being used in a maths lesson

“I made my way through school and got into university, but it wasn’t easy. I’m absolutely aware that if you don’t have the technology and the support you are going to be held back, and I think that’s wrong.”

To help achieve this, Julian is launching the ‘Assistive Technology Action Alliance’ to bring the developers and distributors of assistive technology and eye research together with other professionals and people with vision impairment themselves. The Alliance is supported by Sight and Sound Technology, a provider of hardware and software to the blind, visually impaired and those with learning and reading difficulties. Sight and Sound Technology will offer free online sessions to demonstrate certain technologies and educate Alliance members about how to use them. Those who join in will also be able to share their ideas and experiences.

“My main mission is to make sure that we maximise access to appropriate technology – too much tech is simply developed and put on the market and doesn’t actually address the specific needs of people with particular conditions, it’s almost like creating a blunt instrument and it’s not enough,” he said.

As well as a lack of information about assistive technologies, their cost is also a significant problem. With some equipment costing upwards of £5,000, choosing what to supply pupils with is a high stakes decision. While the budget of a child’s Education, Health and Care Plan may cover the cost of one electronic brailler, it may not extend to a second one if they struggle to get along with the first.

Jill Morris* has a seven-year-old son with vision impairment and dyspraxia that affects his speech. Jack is now home schooled, having tried some time in both mainstream and special schools. Jill says his mainstream school, a Steiner school where technology was not embraced, struggled to support his sensory needs. She has since relied on her own research and networks learn about different technologies and find out what will work best to support Jack’s learning.

My main mission is to make sure that we maximise access to appropriate technology - too much tech is simply developed and put on the market and doesn't actually address the specific needs of people with particular conditions, it's almost… Click To Tweet

“If you’re not in the know, you tend not to get the stuff that you really need,” she explained.

“I think one of the challenges is that, at least in our area, they certainly supply equipment – you can’t argue that they don’t do that – but there’s so much out there, and they don’t tend to be super expert in the equipment that they supply. I’ve found that it’s finding the in-the-know parents is much more effective than anything else.”

Jill has borrowed a Mountbatten Brailler from another parent and loaned an Orbit Braille Display from the Vision Impairment Centre for Teaching and Research (VICTAR), a research and teaching centre in the University of Birmingham. Jack also benefited from the IT skills of one of his teaching assistants, who was able to enhance the functions of some of his other equipment.

Jill pointed out that a formalised ‘try before you buy’ system for assistive technology would be really helpful.

“Why isn’t there a service to borrow a specific type of brailler for six months or so to see if you like it before you invest? I just don’t think the services are organised in the way they could be.”

Jill is keen to see closer connections between the different bodies working in the field of sight loss, to help ensure young people don’t miss out.

“At the moment it just feels like the system keeps changing and no one’s really thought about it as a whole. We need to spend a bit of time thinking about how equipment and assistive technologies can be effectively and affordably provided to people, and ensure they are given the right information. I think that could be quite powerful.” 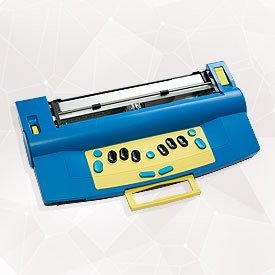 Another emerging challenge is the tension between specialist assistive technology and the rapidly improving accessibility features on mainstream equipment.

Charlotte Hollis, a Qualified Teacher of the Visually Impaired (QTVI) and Assistant Team Lead for Sensory Support at Birmingham City Council, has grappled with this in her day-to-day work. Charlotte, who manages the provision of technology for visually impaired pupils in Birmingham’s mainstream schools, explained that overcoming the barriers to getting hold of assistive technology is no good if young then don’t want to use it. Some young people’s needs can be met by using a run-of-the mill iPad, which is much cheaper, easier to get hold of, and won’t make them stand out from their peers.

Why isn’t there a service to borrow a specific type of brailler for six months or so to see if you like it before you invest? I just don't think the services are organised in the way they could be. Click To Tweet

However, this isn’t a straightforward solution, as some schools refuse to allow pupils with vision impairment to use ‘ordinary’ tech in the classroom. The reason they are opposed to it is often the same reason that some young people prefer to use it – it isn’t specifically for people who can’t see well.

“I think the worry is that other students will want to use an iPad in class too,” Charlotte explained. 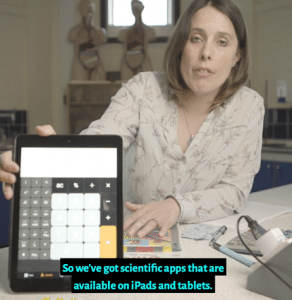 “If it’s a specialist piece of equipment that’s not really known to the other kids, they can say that other pupils can’t use it because it is only for someone who is visually impaired. But they don’t appreciate all of the assistive technology that is built into an iPad or a tablet.”

It is important that school staff are properly educated about what works best and in which situations. In my own experience I didn’t question my pupil’s equipment, but I may well have done if she’d brought an iPad or tablet into the lesson. The better informed teachers are, the more equipped they will be to have conversations with their other pupils about who gets to use what in class and why,  which in turn has the potential to build empathy and patience within the group. 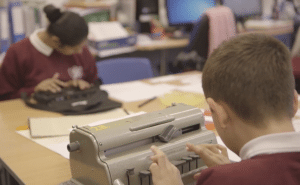 Pupils using braillers in their classroom

Thankfully, some progress is being made in terms of improving access to and understanding of assistive technology. At the start of this year, the government announced that it would be running a pilot that will assess different types of assistive technology for pupils with special educational needs, with the aim of informing best practice on the tools which most help pupils in the classroom.

As well as launching the Assistive Technology Action Alliance in September, Julian is also working on a ‘Back to School’ forum for the Autumn too, focusing on conditions that affect or are associated with sight.

The forum will be an online hub for people to discuss issues, such as:

Organisations that represent a variety of SEND, not just vision impairment, will be invited to join in too and discuss with other participants the things that they would like to see from the world of assistive technology.

“If we can influence policy, influence funding, improve awareness and understanding and really match the assistive technology to the condition by talking to developers directly then I think we will be on the right road,” Julian said. 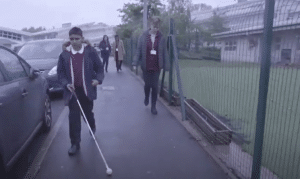 A pupil learning to navigate the area around his school

“I’d really like to encourage younger people to raise their aspirations and look beyond school to university or employment. I want them to feel this is all joined up and get an understanding of how assistive technology might evolve. It has the potential to support them throughout their lives, as their needs change.”

If you are interested in joining the Assistive Technology Action Alliance (ATAA) or participating in the ‘Back to School’ forum please contact Julian Jackson on [email protected] or via LinkedIn.

*Some names have been changed.