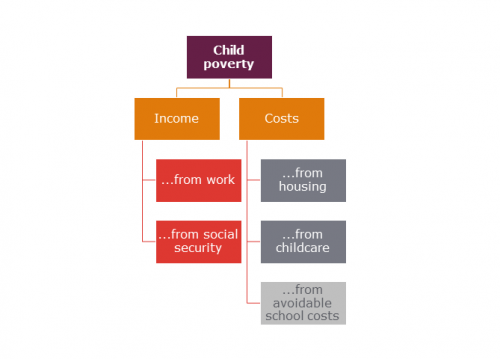 Child poverty is not unavoidable: Part II of the elephant in the room

In yesterday’s blog I set out three different definitions of poverty and showed that whichever definition you use, the case is clear: poverty is tightening its grip on families and this has a deeply damaging effect on children.

I argued that the policy choices that drive child poverty send out waves that rip through schools and youth and social services but understandably, those on the front line tend to focus on mitigating the damage this has on children. This means we don’t always acknowledge the elephant in the room.

The UK has led the way in the past and could do so once again.

What can we do about it?

As Alison Garnham, CEO of the Child Poverty Action Group puts it “Poverty is policy responsive”. In fact, the recent CPAG seminar kicked off by noting that the UK’s past success in this area has become a model for many other countries’ (like Canada and New Zealand’s) strategies.

So what needs to be done?

There are four main lines of attack and all have been deployed to good effect in the past. 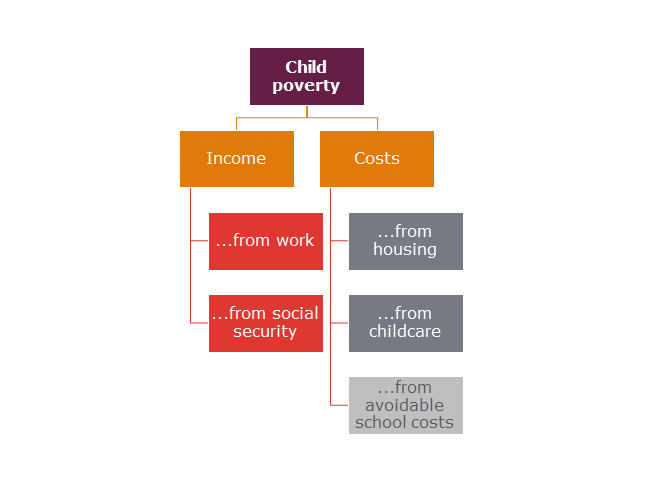 Being aware of specific actions that can be taken in these areas can hep move conversations on from “well it’s inevitable” or, “we need to do…. something”, and onto the concrete actions the sector we should all be demanding from policy makers.

During CPAG’s seminar, Torsten Bell of the Resolution Foundation pointed to data showing that securing long term work remains the most effective way for individuals to exit poverty.

On the other hand, as Gordon Brown pointed out:

“Two-thirds of children in poverty – that’s nearly three million children – are in poverty because their family’s breadwinner is paid far too little to make ends meet.”

His comments are reminiscent of Seb Chapleau’s in a recent CfEY and Microsoft podcast when he reminded listeners that the digital divide only exists because families cannot afford devices, and that in many cases, this is because employers are not paying staff (like cleaners and security staff) enough.

Research in the US has compared states depending on their minimum wage provisions, showing that higher minimum wages can considerably reduce child poverty:

“Evidence based on state-level panel data for the years 1991 to 2002 shows that minimum wages have significantly reduced child poverty rates, after controlling for a number of other potentially relevant factors. These findings are robust to alternative measures of poverty, sample definition, estimation technique, and variable selection.”

Whilst Baroness Stroud used CPAG’s seminar to advocate for voluntary steps – whereby employers are encouraged to pay the living wage, I find it hard to believe that that’s sufficient. Instead, although debates about the Living Wage and things like regulating the gig economy might seem alien from the immediate day-to-day pressures on frontline practitioners, we need to start designing our labour laws with greater consideration for their impact on child poverty – and the ripple effects this has on the education and youth sector.

“Debates about the Living Wage and regulating the gig economy might seem alien from the day-to-day pressures on frontline practitioners, but we need to design labour laws with consideration for their impact on child poverty” Click To Tweet

Although good, stable work for fair pay plays an important part in reducing child poverty, modelling for the Social Mobility Commission concluded that:

“Hitting the relative poverty target through improved parental employment outcomes alone looks impossible in any realistic scenario for parental employment and earnings in 2020… Measures designed to increase wages at the bottom of the earnings distribution (such as the minimum wage) reduce absolute poverty, but only slightly. ”

Furthermore, as Donald Hirsch points out in ‘Not By Pay Alone‘:

“If greater emphasis on pay provides an excuse for the state to withdraw its still much-needed financial support, child poverty will rise”.

As the diagram below shows, even at a much-elevated minimum wage, many families would remain well below the ‘minimum impact standard’. Families therefore still need better support to stay afloat and give their children a fair start in life. 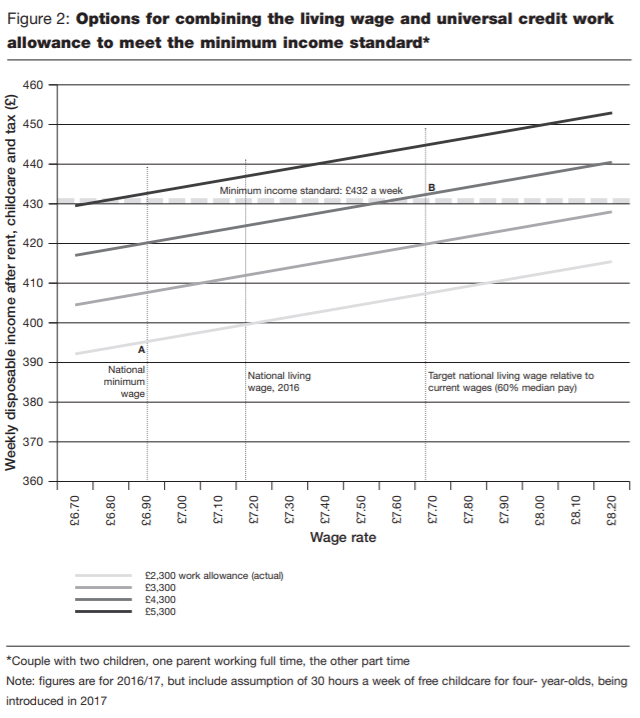 Fortunately, the cost of lifting hundreds of thousands of children out of poverty is relatively small, because it’s the flaws in the design of our social security system that cause many of the issues.

Organisations like the Joseph Rowntree Foundation and the Resolution Foundation have been vocal about a number of cogs in the complex machinery of our benefits system that could run far more smoothly. Mending these would be transformative.

It doesn’t take a degree in accounting to know that the state of a family’s finances depends on expenditure as well as income. There are two key budget lines here.

Childcare costs have risen 42 per cent since 2008, twice the rate of inflation according to CPAG. This places huge pressure on families in two ways: for some, it results in an increase in outgoings; for others, it makes childcare unaffordable locking them into poverty simply because the system isn’t designed to give them the flexibility to go out and work.

“Childcare costs have risen 42 per cent since 2008, twice the rate of inflation. As a result families are locked into poverty because the system isn’t designed to help them go out to work” Click To Tweet

This is highly relevant to discussions taking place in the DfE at the moment, as there’s been talk of extending the school day to aid the covid recovery. A policy like this should not just be evaluated on the basis of its pedagogical and socio-emotional impact; impact on the family budget should be considered too.

In the meantime, where schools can, they should offer regular, free or subsidised after-school activities as these can provide a vital lifeline to families struggling to make ends meet.

The extent to which rising costs shape poverty is nowhere more obvious than when it comes to housing and the Joseph Rowntree Foundation estimates that an extra 3.1 million people in the UK are in poverty after their housing costs have been paid.

The government’s decision to use ‘income before housing costs’ as its definition of poverty in the 2010 Child Poverty Act was therefore deeply misguided.

Costs associated with schooling represent a much smaller line in the family budget, but they can still pile on the pressure, pushing many to breaking point – as research by the Children’s Society demonstrates: 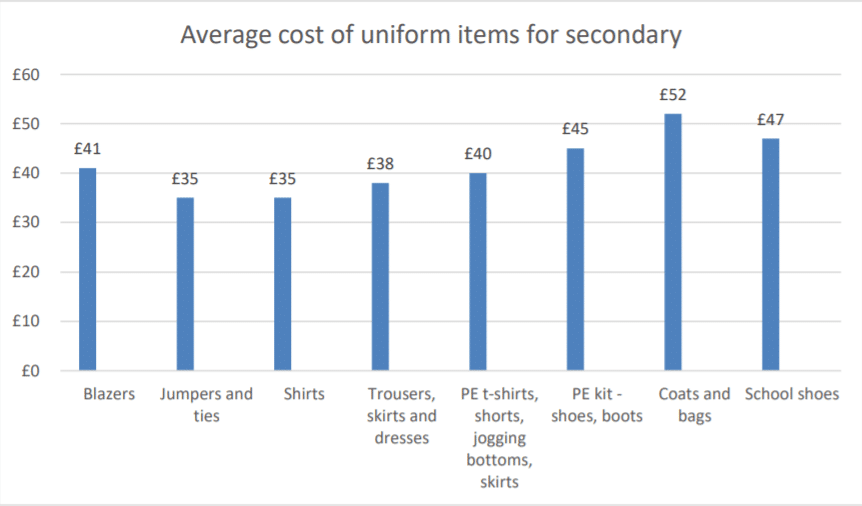 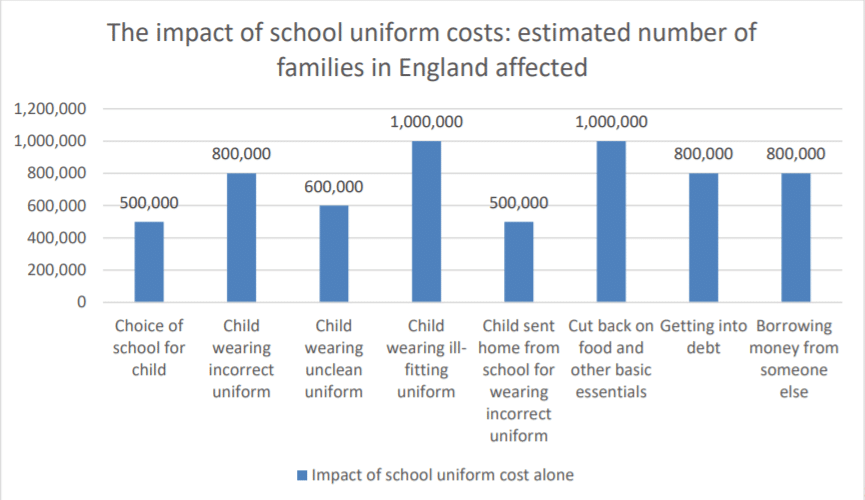 Initiatives that help to ‘poverty proof the school day’ therefore offer at least one way schools can contribute to reducing child poverty, and the current bill before parliament to limit school uniform costs may help too.

Will anything be done?

As I argued in the first part of this series, headlines about benefit scroungers that demonise individuals have served to drive welfare policies that are tough on families but generous to pensioners.

As the Economist put it:

“[Back in 2014] it felt impossible to be too mean to benefit claimants. They were a political piñata: whack them and votes fell out.”

There’s therefore a risk that the calls to action set out in this blog might fall on deaf ears. However, change is in the air and there is an increasing willingness to mend the holes in society’s safety net.

In a more recent article, the Economist notes that:

“The pandemic has forced a re-evaluation of the social contract, in particular how risk should be divided among individuals, employers and the state.”

In fact, Briton’s typically hard attitudes to welfare appear to have been softening even before the pandemic.

“Change is in the air and there is an increasing willingness to mend the holes in society’s safety net.” Click To Tweet

The 2019 British Social attitudes revealed a larger proportion of people subscribing to broader definitions of ‘who ‘counts as poor’. 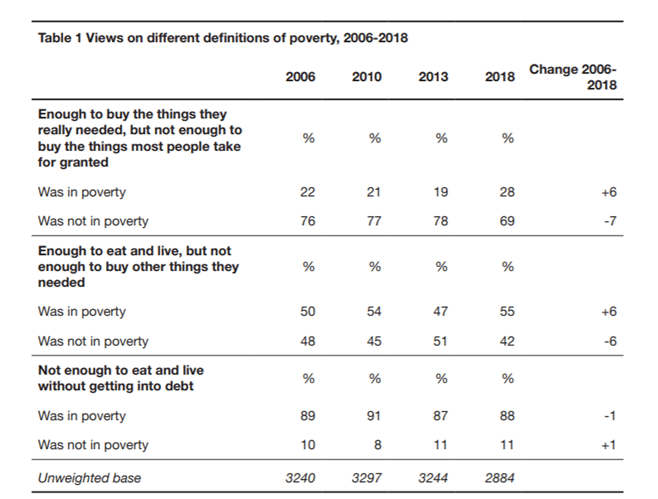 The survey also found considerable shifts in people’s responses to a number of statements:

Ultimately, a year of being confronted by the precarity of our physical and financial health on a daily basis can surely only have compounded this shift in the zeitgeist, and the work of Marcus Rashford et al., will no doubt have added to this.

Cutting child poverty might therefore be a vote winner once again.

Given that we know we can tackle child poverty and that we know it damages our children deeply, I can only hope that momentum will gather behind a renewed commitment to tackling the root causes of the problems teachers, youth workers and social workers grapple with every day.

Doing so should sit at the heart of a fair and compassionate society. 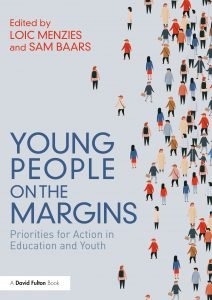 CfEY’s new book “Young People on the Margins: Priorities for action in education and youth” will be published by Routledge later this month. Pre-order it here and get a 20% discount with the code “FLY21”

“By solving child poverty we can give every child a decent start in life. Doing so should sit at the heart of a fair and compassionate society.” Click To Tweet

Catch up on Part I of this series of blogs here