Assessment and oracy press coverage, home and away

We are delighted that Testing The Water – our report on assessment with Pearson, has attracted attention from overseas. Last week, London-based Chilean journalist Mónica Pérez from the news channel T13 interviewed Will Millard about curriculum and assessment reforms in England. In the segment Will explains that while reforms in England sought to move schools away from an over-reliance on levels and grades, many continue to use them regularly.

You can read our Testing the Water report, here.

We were pleased that Emma Hardy’s brilliant event celebrating oracy in parliament was reported in Schools Week and the TES. Both emphasised calls for better teacher development on oracy- an issue at the heart of our landmark, 2016 report. 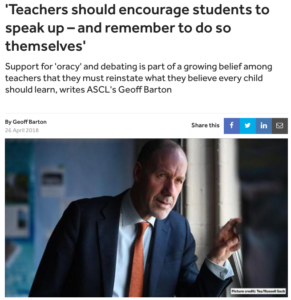 Geoff Barton, ASCL’s General Secretary, spoke at the event, and wrote afterwards in the TES about the “liberating power of oracy”, and the importance for pupils from all backgrounds to participate in debating. He said:

“Debating is at the heart of the way our democracy works, how our laws are formed, our justice enacted, our values enforced. It should be an entitlement of every child in every school of every background.”

Duncan Partridge, Director of Education at the English Speaking Union (ESU), said in his blog that the event demonstrated oracy is now recognised as something the government, Ofsted and schools need to take seriously.

CfEY announce new research on the future of tutoring

The Centre for Education and Youth are excited to announce an ambitious and timely new piece of research on the future of tutoring in the UK. Why are we researching this topic? As our report ‘A Space for Maths’ made clear last year, there is abundant evidence on the effectiveness of school-based small group and…

It feels like a lifetime ago that I announced my intention to hand on the baton as CEO at CfEY so that someone new could bring their fresh ideas and energy to the writing of our next chapter. Today marks an important milestone in that process and we are delighted to announce that we have…

CfEY at the Festival of Education 2021

At this year’s Festival of Education CfEY ran a popular series of events, drawing on key themes from our book ‘Young People on the Margins‘. If you missed the event we have all the sessions available for you to catch up on below. 1. Understanding Young People’s Life-stories Abi Angus, Senior Research Associate at CfEY,…