In April, a shorter version of this piece appeared in Schools Week the day after Channel 4 screened ‘The Truth about Traveller Crime’. Since then, Ofcom has received nearly 900 complaints about the programme and the organisation Friends, Families and Travellers has collected over 7000 complaints. The co-chairs of the all parliamentary group for Gypsies, Travellers and Roma wrote to Channel 4 to challenge both the racist rhetoric and the questionable research methodology. Travellers have spoken out about their experience of discrimination following the show. 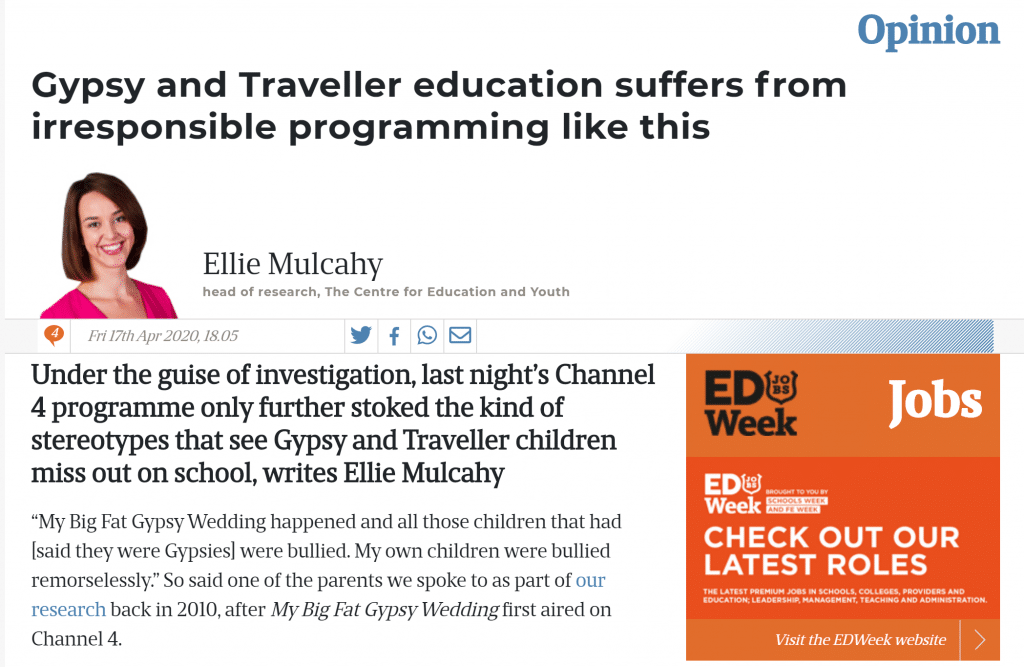 “Big Fat Gypsy Wedding happened and all those children that had [said they were Gypsies] were being bullied. My own children were bullied remorselessly.”

In 2010, ‘My Big Fat Gypsy’ wedding first aired on Channel 4. During our research into Gypsy, Traveller and Roma (GRT) pupils’ progression to higher education, we heard how the programme incited a wave of racist bullying towards Gypsy and Traveller children. Bullying that robbed some children of their education. And yet, here we are ten years later, in the midst of a pandemic that should see us looking out for the most vulnerable in our society, being presented with another programme (from Channel 4 again) that stigmatises a whole community.

Last night Dispatches’ ‘The Truth about Traveller Crime’ disguised racism as investigation. It was undoubtedly biased, passing attempts to question whether all Travellers can be blamed for crimes committed by a few were swiftly undermined before returning to generalisation and sensationalist ‘reporting’. Regardless, the title alone is incredibly damaging. You would hope that a title which uses an ethnicity as an adjective to describe crime wouldn’t make it past the scrutiny of producers and programme directors.

Coincidentally, I spent yesterday finishing my book chapter on GRT pupils’ experiences of and access to education for our upcoming book ‘Young People on the Margins’ which will be published by Routledge later this year. GRT pupils have the worst educational outcomes of any ethnic group in the UK. A whole section of the chapter looks at how racism and discrimination affects GRT pupils’ education. 91% of people from GRT background have experienced discrimination because of their background and 70% have experienced discrimination in some aspect of their education. A 2013 report by the Children’s Society found that 63% of GRT young people had been bullied or physically attacked, 86% had been called racist names. Research published in March this year found that nearly half of Traveller girls and a third of Traveller boy interviewed cited bullying as the main reason they left school early.

A 2013 report by the Children’s Society found that 63% of GRT young people had been bullied or physically attacked, 86% had been called racist names. Click To Tweet

In last night’s programme, the presenter cited ‘cultural factors’ as related to the crimes committed by Travellers, then referenced low attendance in secondary school as said cultural factor. Confusing poor educational outcomes and years of exclusion from official systems with culture is factually inaccurate at best. Pauline Anderson (OBE) Chair of The Traveller Movement, a rare voice of reason on the programme, explains that the biggest barrier to Gypsy and Travellers’ education is ‘the general acceptance of bullying and racist name calling’. This echoes, Sir Trevor Phillips’s comment in 2004 that prejudice and discrimination against GRT groups is ‘the last respectable form of racism’. After Pauline’s comment, the programme cuts to some videos of men, presumed to be Travellers, fighting.

Fear of discrimination, and fear that it won’t be dealt with by schools, is the main reason that GRT parents remove their children from school. This programme has made people from Traveller communities fearful of the repercussions they might suffer. We should ask ourselves, if it weren’t for lockdown, what impact would this programme have on children going to school on Monday? Would their parents send them or would they be too worried about the bullying they would face? Would children miss out on seeing their friends and being welcomed back after Easter by their teachers? Are there children right now with a knot in their stomachs at the thought of returning to school once this crisis is over? I urge all school leaders, in particular those that serve communities of GRT families, to reach out to parents, to acknowledge this programme and to make it clear that you reject its claims and that any bullying or racism will be dealt with. To highlight to all parents that your school that your school is a safe community for all.

I urge all school leaders serving communities of GRT families to reach out to parents, to acknowledge this programme and to make it clear that you reject its claims and that any bullying or racism will be dealt with. Click To Tweet

There are plenty more flaws with the programme. Not least the questionable use of statistics and the investigation of crime rates. The programme features an analysis of crime rates around Traveller sites that selects a sub-sample of sites where crime has been reported and compares this to national average crime rates. Yes, that’s right, they select a sample of areas to examine crime rates and their selection is based on the fact that crime has been reported there. It is not until twenty minutes later that they look at a larger sample of areas with sites and find that in the majority, crime is lower than the national average. While a Criminologist explains that ethnicity is not a causal factor for crime and explains that factors such as poverty play a larger role, this is glossed over and the overall message is Traveller sites equal crime. But the link to poverty is crucial here. Travellers experience high rates of poverty, and yes poverty can lead some people (of all ethnicities) to commit crime. However, poverty and unsafe living conditions are caused or perpetuated by discrimination. When the third of GRT people that live in mobile accommodation look for a place to live they face systematic barriers such as the extreme shortage of legal, safe sites, and hostility from communities that associate Travellers with crime, which is hardly surprising when the media continues to feed these prejudices.

History has taught us that programmes like this directly impact children and young people’s experience of school and their educational outcomes. This is unacceptable, but it has already aired. It will now be left to teachers and school leaders to do their best to counteract the damage that has been done. Reach out to parents and pupils, reassure them. Later, address any bullying and racism robustly: studies highlighting best practice tell us that bullying is best addressed by educating the bully and helping dispel stereotypes. Ensure that your curriculum is inclusive and your school culture values and celebrates diversity.

History has taught us that programmes like this directly impact children and young people’s experience of school...It will now be left to teachers and school leaders to do their best to counteract the damage that has been done. Click To Tweet

There are some elements of the programme that of course make us feel concerned for victims of crime and anti-social behaviour. However, you can be angry about the damage done by crime without wanting to see an entire ethnic group scapegoated for it.  Kate Green MP, Chair of the APPG for Gypsies and Travellers, who clearly tried her best to refute the discriminatory narrative, explained: