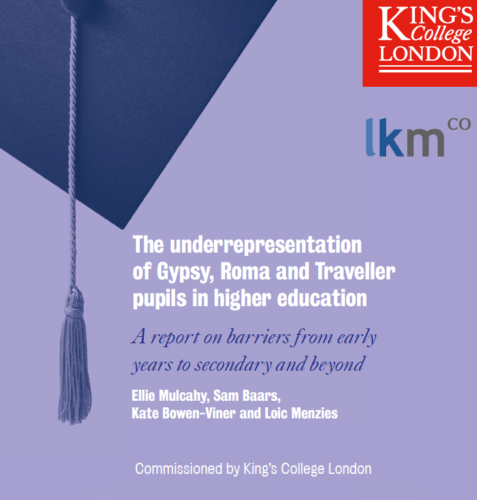 Progression to University by Gypsy, Roma and Traveller Pupils 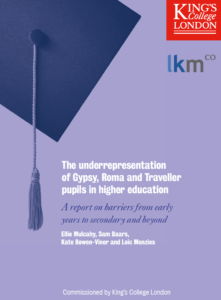 New research by LKMco, in partnership with Kings College London’s Widening Participation department reveals barriers ‘at every level’ that combine to make Gypsy, Roma and Traveller pupils one of the most under-represented groups in UK universities.

The new report shows that ongoing prejudice combines with poor school outcomes to make progression to university a struggle for many pupils. Yet new research suggests that better information, and reassurance that racism will not be tolerated could awaken interest that lies just beneath the surface.

Back in 2004 Sir Trevor Phillips described prejudice and discrimination directed at GRT groups as “the last respectable form of racism”. This new research shows this continues to be the case with members of the Gypsy, Roma and Traveller communities telling researchers that ‘remorseless bullying’ has led many pupils to hide their identity and to feel that they were not welcome in education.

Prejudice combines with a lack of knowledge of university, cultural norms and low academic attainment to make application and acceptance to university a rarity, the report says.

The new report by education think-tank LKMco, entitled ‘The underrepresentation of Gypsy, Roma and Traveller pupils in higher education: A report on barriers from early years to secondary and beyond” is published today by Kings’ College London’s Widening Participation Department.

Researchers spoke to pupils, parents and experts and analysed data on outcomes from the early years through to A-Level.

The report finds that:

‘This is an important and pivotal report that we are pleased to have played a role in bringing about. Universities must be both open and inclusive for all students. We look forward to working with colleagues in the higher education sector to bring the report recommendations into practice’

“The fact that the number of Gypsy, Roma and Traveller pupils in our schools is small should not mean they are ignored. This report shows that far more needs to be done to respond to these young people’s unique circumstances.”

Download the full report here or a briefing version here

Among other recommendations the report says: