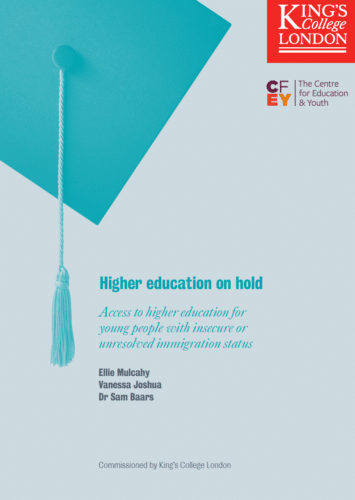 In partnership with King's College London 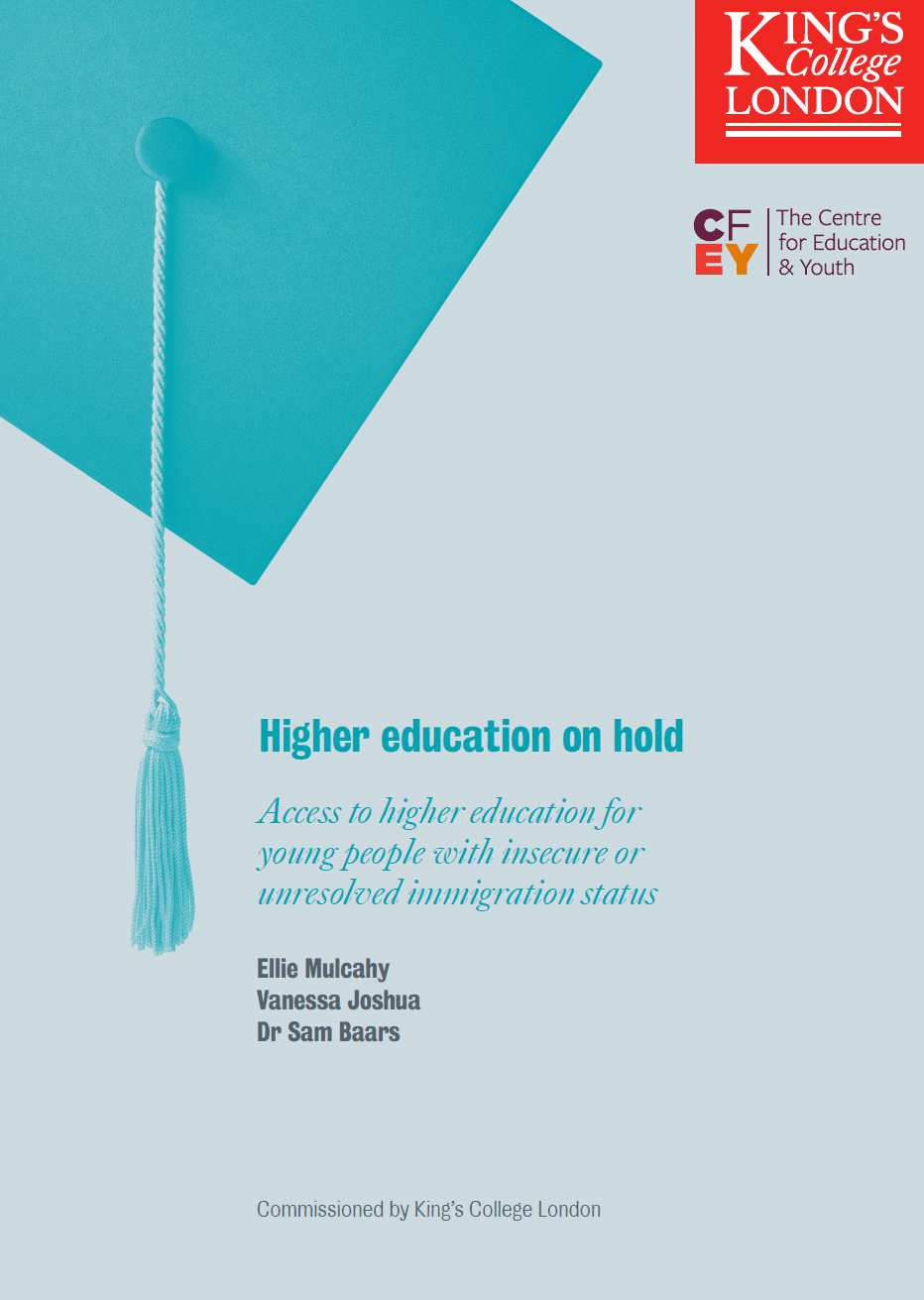 Our new research report ‘Higher Education on Hold’, in collaboration with King’s College London, explores the barriers to higher education access faced by young people who have insecure immigration status.

The report is the first to examine the barriers to accessing HE that that stand in the way of young people who:

Our new research finds that many young people who have completed most of their schooling in the UK are ineligible for student finance, and have to pay international fees of up to £30,000 per year. This forces many to give up, or delay their journey to higher education.

Young people who have completed most of their schooling in the UK are forced to give up, or delay their journey to higher education because they can't access student loans Click To Tweet

In order to access student loans young people with certain statuses must have held their immigration status for three years and have lived in the UK for at least half their lives (see figure 1).

One young person described how despite having been granted limited leave to remain, they were blocked from accessing HE due to ‘Long Residence Category rules’:

“We go through all this, being limited and being blocked and having all these obstacles. When we finally get our limited leave to remain, oh, great. It’s great. [You think] this whole thing has been lifted, but no. You have to go through student finance and it’s very, very hard on people because of status.”

The scale of the issue

The scale of this issue remains unknown. The Home Office’s does not publish figures that specify the stage people are at in their immigration journey. This means that it is impossible to measure the scale of the wasted talent, but experts estimate that the number is at least in the thousands.

The impact of ‘being blocked’

Young people involved in the research described how being unable to pursue their education impacted on their mental health:

“I suffer from anxiety…I’m on medication… it was really hard to struggle because I did do very well at sixth form. I came out with the second highest grade in my whole sixth form cohort. So, imagine not being able to go to university when all my friends have graduated and are doing big things. Mentally it has a big impact on me.”

'I came out with the second highest grade in my whole sixth form cohort. So, imagine not being able to go to university when all my friends have graduated and are doing big things' Click To Tweet

The barriers standing in the way of young people’s hopes and dreams are not only detrimental to the individual, but also damaging to our economy and society. High achieving young people are denied the chance to contribute intellectually and economically to the UK. The young people we met want to be doctors, midwives, business people and scientists but their aspirations are put on hold simply because they cannot access a loan as other students can.

The barriers standing in the way of young people’s hopes and dreams are not only detrimental to the individual, but also damaging to our economy and society. Click To Tweet

We are therefore today recommending that schools, universities and Student Finance England provide better information and training for staff so that teachers, careers advisors, admissions teams and student finance advisors understand these issues. This will ensure they can provide young people with the support they need. Universities should also call on the Department for Education to remove the restrictions that currently scupper young people’s progression so that young people who live in the UK legally no longer struggle to access HE.

As Michael Bennett, Associate Director of Widening Participation at King’s points out:

“These are students with a lot of vital skills, knowledge, and experience. It is up to us to tap into this talent and to support them to achieve their cherished goals. We call on other universities to support our campaign in asking the government to remove the restrictions which deny young people access to student finance and therefore the opportunity to fulfil their potential.”

We are pleased to share the first report from our collaboration with The Rothschild Foundation, which explores the experiences and transitions of young people aged 16 to 24 in Buckinghamshire. You can read the full interim report here, and the summary, here. Recognising the challenge that the pandemic has imposed on the younger generation, we…

Oracy after the pandemic

Oracy APPG report ‘Speak for Change’ published today In 2016 The Centre for Education and Youth published The State of Speaking, in partnership with Voice 21 and Big Change. This research revealed that while teachers prioritised oracy highly, they were rarely able to give it the attention they felt it deserved. This research spurred the…

Today, the Oracy All-Party Parliamentary Group (APPG) has released an interim report which highlights that young people have unequal access to opportunities to develop their oracy skills in schools in England. It emphasises the vital importance of developing students’ confidence and competence in spoken language particularly as the disruption to children’s education over this past…