Sponsored academies *have* improved faster than other schools. But only a bit!

Sponsored academies have improved more than other schools, but only by 0.7% when compared to similar schools. 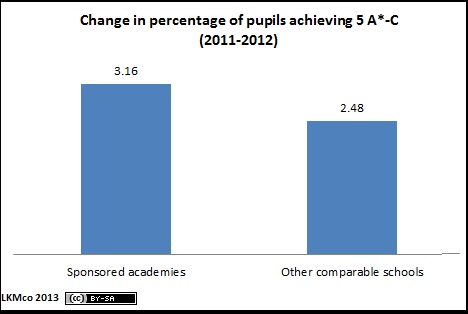 We can see from this that sponsor academies mainly just mirror the performance of other schools in their decile with a few exceptions, particularly in the second.
So yes, sponsor academies do do a little better. But really not that much!
(I’m no Becky Allen or Chris Cook so do bear with me if my maths isn’t 100% spot on- you’re more than welcome to check my workings on the attached spreadsheet!)
P.S. I was concerned that the average for my matched sample of “other” schools might just be a consequence of which schools made it into my sample so I also tried matching each academy to the average for a non academy in its decile. The result was 2.45% yielding the same 0.7% gap as my original method.
A lot of people have asked me if the difference is significant. I’m sure you can guess. But no it’s not. Somehow I don’t think a DfE press release which said “Sponsor academies *may possibly* increase results by *almost* 1% more than other schools” would have sounded quite so good.
*amended 18.25 25/01/13 to correct figure on change in non-academies from 2.52% to 2.48% and thus total difference from 0.6% to 0.7%