Character education: What are we really talking about? 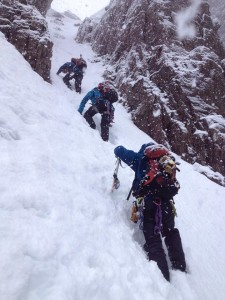 As someone who considers the ability to sit on a cold, snowy mountain ledge for an hour or so a desirable trait, I’m often tempted to put my (Antipodean) boyfriend’s complaints about doing so down to a severe lack of character. When I see the kids from the posh private school down the road cycling around in shorts in mid-winter I wonder whether a stern, traditional British education might have given him the resilience not to whinge when belaying.

At this point I realise I’m being ridiculous, and decide not to goad schools into changing uniforms to develop character better. But unfortunately, when Nicky Morgan told us pupils needed more character, the sector acquiesced, to the point where correlational statements like this have not always received the scrutiny they deserve:

So why do I think that the way we talk about character is bunkum? Well, before I go any further, I should say that I think the purpose of education is for all children and young people to enter adulthood with the knowledge, skills and confidence to write their own life story (listen up select committee). That in no small part depends on them becoming well rounded individuals and developing a whole range of attributes that are conveniently bundled up as ‘Character’. Like the Jubilee Centre, I think that education should, amongst  other things, develop ‘virtues’ and so I am by no means opposed to schools, parents and policy makers putting more emphasis on wider development. In fact, I’m very pleased that Morgan has reminded us that the ‘whole child matters’. What frustrates me is the incredibly reductionist way the label ‘Character’ leads people to look at this; increasingly talking about it like it’s an actual ‘thing’ and simplistically commenting on whether or not x develops character as if it’s that label which makes running trips or after-school clubs worthwhile.

What do people normally understand character to mean?

The label ‘Character’ seems to imply that everyone can be ranked on a scale of how much of it they have.

Try asking yourself a series of questions:

Attempting to answer these questions should make it clear that treating the full range of disparate attributes which form part of our understanding of character like they embody a single quality, is impossible.

It makes sense to say that Chrissie is better at Maths than Rob, or that Hilary is better at Rugby than Pete; since these things can meaningfully be ranked in a way that corresponds to a normal understanding of what ‘being good at Maths’ or ‘being good at Rugby’ involves. They can be compared using (generally) agreed standards. Indeed, it may be possible to say that Rachel has more ‘grit’ than Ray, because there are tests for this too and ‘grit’ has a specific, defined meaning.

But to lump grit, resilience, ethical conduct and any number of other ‘traits’ under the label ‘Character’ and say, “we are going to run a football club because it will give our pupils more character” is daft. In its definition, (which the DfE has now adopted), The Jubilee Centre itself describes ‘character’ as an umbrella term and identifies four components (moral virtues, civic virtues, intellectual virtues and performance virtues). 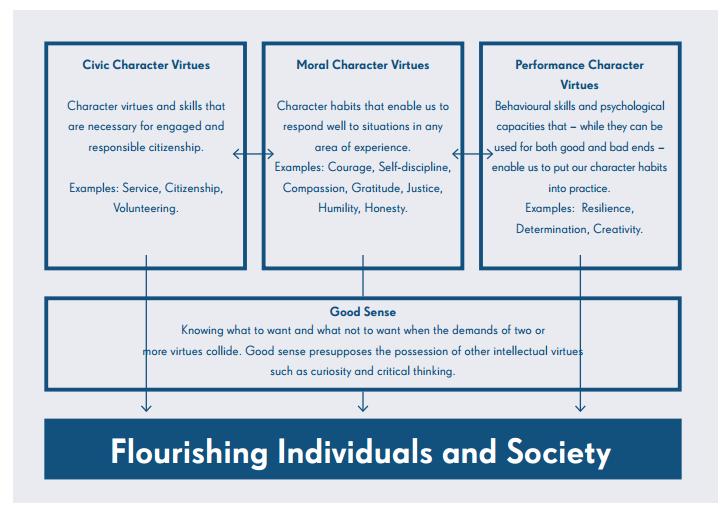 Framework for Character Education in Schools, The Jubilee Centre

The worrying tendency to treat these like a single, quantifiable characteristic rather than character related attributes (or aspects of being a well-rounded individual) therefore needs to be resisted. Otherwise schools will end up deciding whether to run a drama club instead of a football club because a publication has said pupils who participate in the arts do better in tests of character[1].

Why do these things?

Fundamentally, we’re in a bit of a pickle if we need a Secretary of State to tell us that character matters for us to feel justified in running football clubs and school plays.

You could try and synthesise each of those very different things into a single thing and say it’s good for you because it builds your character… but why?

[1] Indeed, the report goes on to emphasise the importance of how a club is run as well as what it is delivering

2 thoughts on “Character education: What are we really talking about?”