A common argument made by grammar school enthusiasts is that “our school system already selects on the basis of wealth”. This argument is fundamentally flawed: why make things worse just because there is already a problem? However, this does not mean we should be unconcerned about existing selection in nominally ‘comprehensive schools’. A new report published by The Sutton Trust this week lays this problem bare by highlighting unacceptable social selection in our best schools.

Encouragingly there has been some improvement since 2013 when on average only 7.6% pupils in the top schools were FSM eligible. Results are also more encouraging when schools are instead ranked on Progress 8 scores. Based on this ranking, the proportion of FSM pupils in the top 500 schools is 15.2%, much closer to 17.2% . 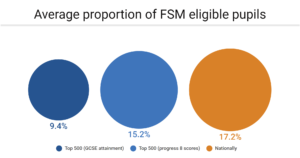 House prices however are another important driver of ‘selection by the back door.’ ‘Catchment areas’ push up house prices in areas close to high performing schools up, pricing disadvantaged families out of high quality education. The Sutton Trust found that houses close to the top 500 comprehensives (based on GCSE attainment) cost on average £45,700 more than houses in the same local authority, a 20% premium. Yet although house prices are an important driver, they do not explain the full selection effect since the average FSM rate in top schools’ catchment areas is 12.8%, which is still 3% higher than their average FSM intake. Only half the FSM gap is therefore accounted for by these schools being situated in wealthy areas. Essentially, if you are a poor pupil whose family manages to live close to a top school, you’re still less likely to go to a top school. 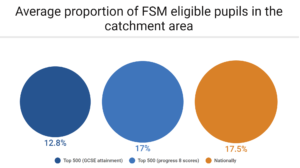 Advocates of academic selection argue that allowing new grammar schools to open would reduce this social selection and lessen the impact of house prices squeezing poorer families out of top schools’ catchment areas. However, the Sutton Trust’s research clearly shows that grammars are even more socially selective than other schools in the top 500 schools list. Amongst ‘academically selective’ schools, FSM rates only average 2.5%, far worse than the rest of the group. The Sutton Trust suggests two main remedies to this inequality:

Given the worrying levels of bias in intake that this report reveals it is clear that we are long way from schools being able to fulfil their potential for promoting social justice. Further selection, whether academic or faith based, will do nothing but worsen the situation. Instead the government should concentrate its efforts on systematically tackling the barriers to equal access.