The relationship between disadvantage and attainment varies considerably between different parts of England. Combining datasets shows that poverty has a particularly pernicious effect on educational attainment in some area-types, particularly the rural areas shown in green, below. 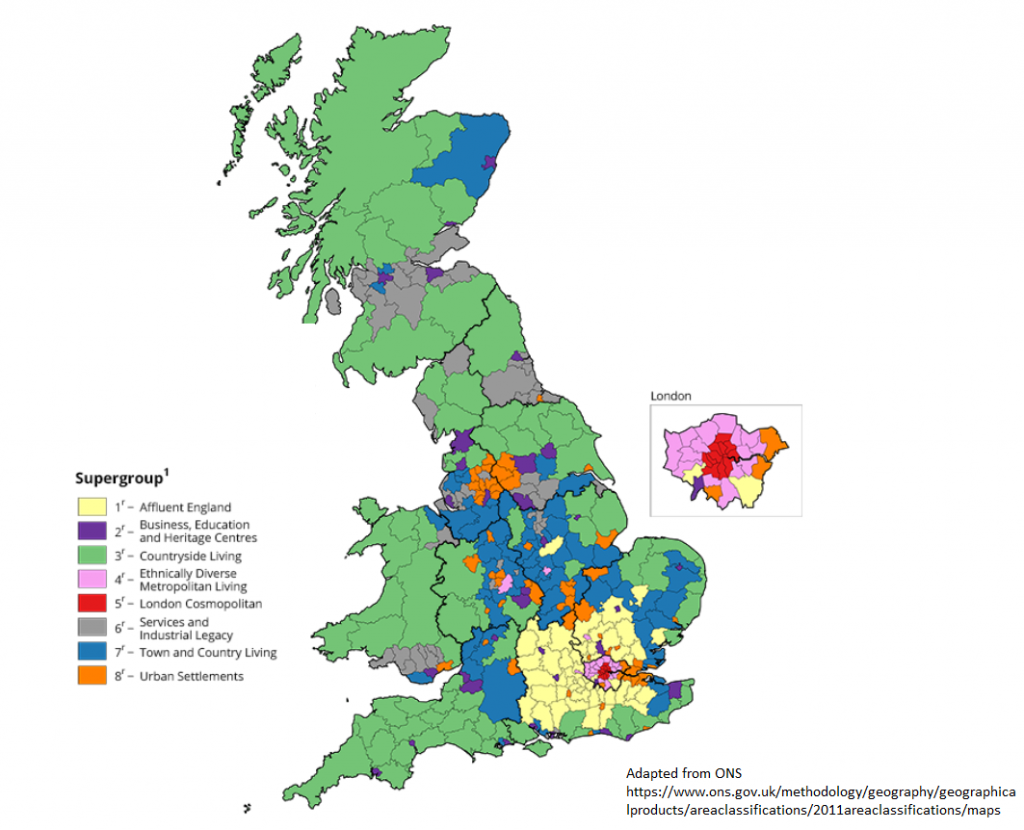 In recent years there has been increasing recognition that the relationship between deprivation and educational achievement is not as simple as we once thought. Researchers like Simon Burgess have shown that the interaction between disadvantage and ethnicity / migration status, for example, is often underestimated.

At LKMco we’ve had a longstanding interest in ONS area classifcations (see ‘The Two Kingstons – what FSM does and doesn’t tell us’ and ‘Maybe it’s because I’m a Londoner’). These classifications combine a range of characteristics of different areas, including industrial and employment data; demographics and qualification levels.

Affluent England and London in the lead (surprise, surprise)

At the most basic level, we see that area types differ considerably in their attainment and deprivation levels.

Areas described as ‘Affluent England’ achieve most highly, but ‘London Cosmopolitan’ and ‘Ethnically Diverse Cosmpolitan’ areas are not far behind – despite having two or three-times the same level of deprivation.

However, once we plot FSM levels against attainment, the results get considerably more interesting – and the worrying situation in rural schools is revealed.

Firstly, notice how apart from a small cluster of very-low-deprivation, very-high-attainment schools on the far left, pink dots  dominate the top of the distribution. These represent ‘ethnically diverse cosmopolitan’ areas (most of which are in Greater London). This shows that regardless of their deprivation levels, pupil tend to do best in these areas. Meanwhile, red dots are concentrated in the top right-hand corner. These represent high-achieving, high-deprivation central-London schools. 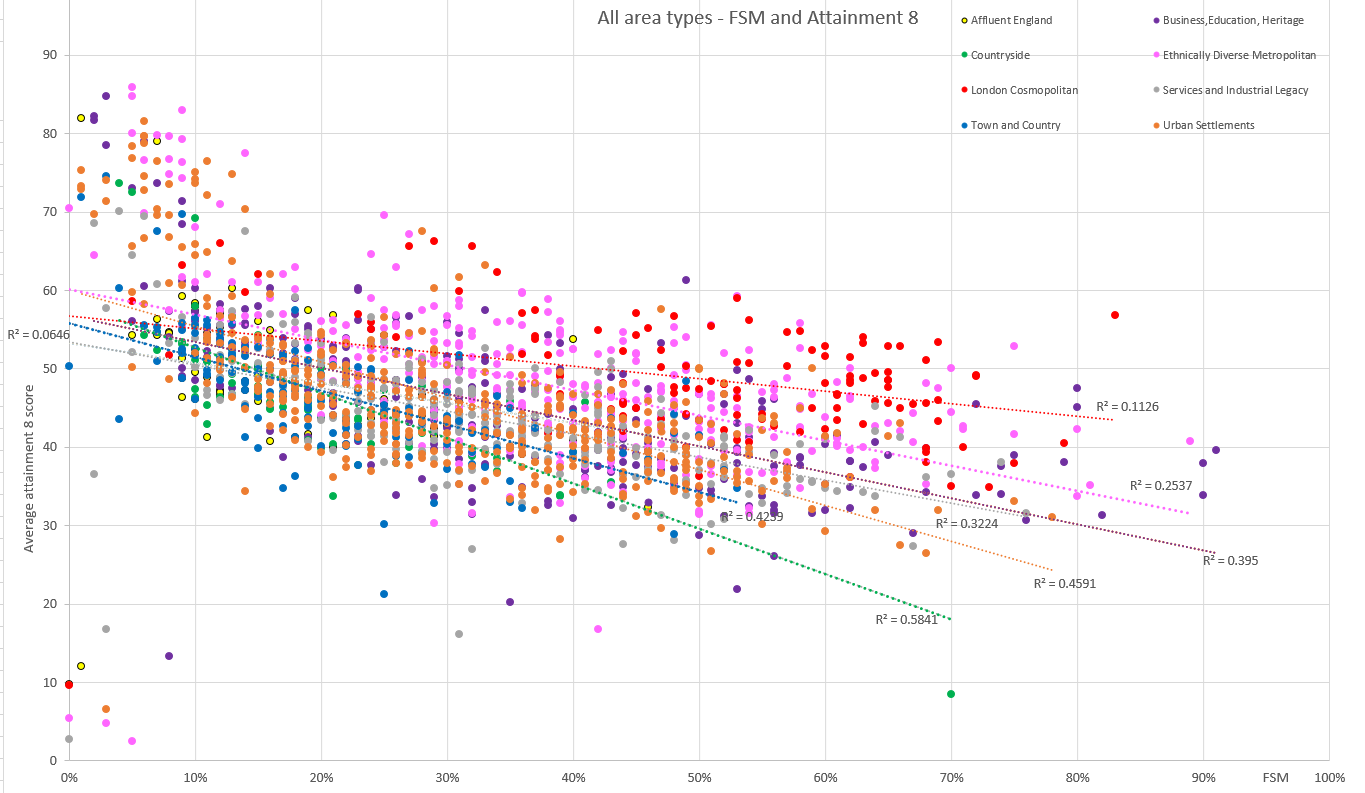 How strong is the link between deprivation and attainment…? It depends on the area

Notably, in rural areas the relationship between poverty and educational outcomes is particularly strong. So although pupils in rural schools with low deprivation attain highly, schools in deprived areas are really struggling.

What about pupil progress?

Switching the measure to pupil progress paints an even starker picture of pupil outcomes in disadvantaged rural schools.

In general, the relationship between FSM and Progress is much weaker than when looking at attainment (r squared values of <0.2 in most area types).

This is unsurprising, since how well pupils achieve at KS2 (which is taken into account in Progress 8), already depends a lot on their deprivation level.

However, in rural schools, we find that a moderate relationship returns. It therefore seems that low attainment in rural, high-deprivation secondary schools is not just about pupils having low starting points. Instead, there is an important link between school deprivation level and progress rates.

Why is pupil progress in disadvantaged secondary schools worse in rural schools than in other parts of the country? Click To Tweet 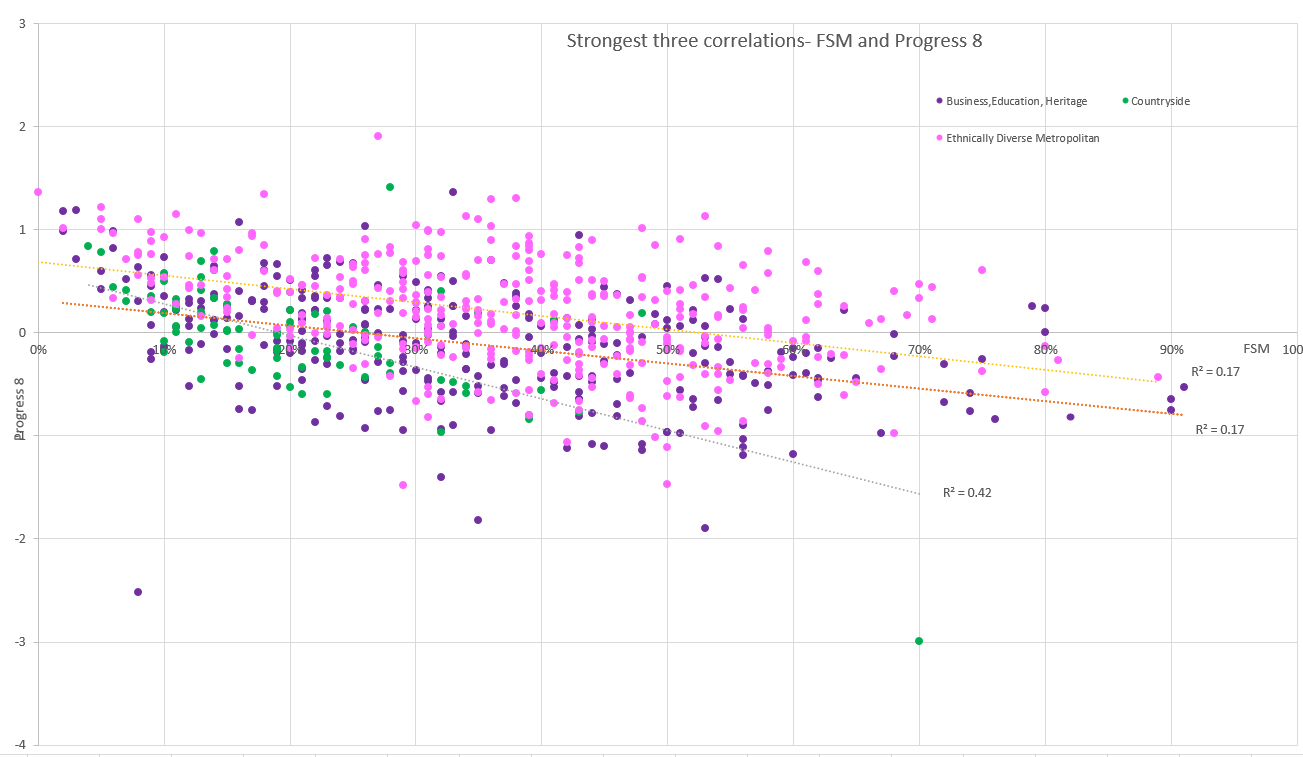 Geography, demographics and community/economic context play a critical role in moderating the relationship between poverty and educational outcomes. Click To Tweet

Studies of the factors affecting schools in different area types are therefore urgently needed, since these would help schools understand how best to respond to their circumstances.

Key factors to explore could include:

Find out more about this analysis in Schools Week and read commments from Paul Luxmoore, the executive head of the Coastal Academies Trust.

Schools and the National Tutoring Programme: taking back control?

Our Government is at fault for the failings of the National Tutoring Programme, but schools also need to raise their game to ensure its success. ‘Just give us your f***ing money!’ Who remembers Bob Geldof, in the middle of the heat of Live Aid, shouting this at all of us watching on TV?’ Well, sometimes…

This year I got a civil partnership and became a parent for the first time (mandatory baby pic, below). To complete a trinity of life events, I’ve got a new job as an Associate Director at the research consultancy SQW where, alongside continuing my work in education, I will contribute to work in health, social…