The NAHT have today released a damning report detailing their members’ response to the Government’s pilot of the new multiplication tables ‘check’ (MTC) for children in Year 4. The test has been an educationally dubious waste of time and money, hastily implemented and with multiple technical flaws. As LKMco’s resident ex-Year 4 teacher, I’ve gone ahead and highlighted the five areas that shocked me most about this pilot.

So, without further ado, my top five:–

As I’m sure many of our readers will have experienced, the state of ICT provision in primary schools can probably be most diplomatically described as ‘variable’. Multiple responses to the pilot complained about the difficulties that pupils experienced whilst attempting to take the test across different devices.

In fact, many respondents described the test as more a test of ICT proficiency than of times-tables knowledge, with many children struggling to use keyboards and mice while others were able to use touchscreens. Given the short time limits on questions, any disparity in ease of input immediately throws into question the utility of this test as an actual assessment. Poor Internet connections and ageing technology further hindered access, as did sheer lack of devices, and in an education system as chronically underfunded as our own, is it really realistic or reasonable to suddenly demand a wholesale upgrade or expansion for the sake of a single test?

In an education system as chronically underfunded as our own, is it really realistic or reasonable to suddenly demand a wholesale upgrade or expansion for the sake of a single test? Click To Tweet

Many respondents commented on the design of the test itself as being dull, unengaging and in many ways inaccessible. The on-screen keypad was not movable for left-handed children, with digits arranged in a way unfamiliar to young users of many other common pieces of similar software, such as Times Tables Rock Stars. Although the software featured a screen reader for children who needed audible access arrangements, this was also completely inadequate, reading numbers out digit by digit (e.g. “one, three, two” instead of “one hundred and thirty-two”), leading to confusion amongst many children.

Although the DfE is ostensibly committed to workload, it has seen fit to roll out another high-stakes test, with no apparent consideration for how this would impact workload in schools. And this is very much a high-stakes test: § 1.1.1 of the Standards & Testing Agency’s assessment framework states that “as is the case with the Phonics Check, school-level results will be available to selected users including Ofsted via the Analyse School Performance (ASP) data system”. Although MTC data will not be explicitly published in performance tables, it will be accessible to Ofsted inspectors (amongst others) “to help support school improvement”, and thus will become a significant additional pressure for staff and students to perform for Ofsted.

The NAHT’s findings show that 85% of respondents reported that workload was either increased or significantly increased by administering the multiplication tables test. Just 15% reported no change in workload, and an incredible 0% (that’s not rounded; it was literally zero respondents) said that the test had at all decreased workload.

The utility of tests such as these has long been debated, and practitioners felt that this latest instalment had very little pedagogical value. 94% of respondents to the the NAHT’s survey did not feel that this test told them anything that they did not already know about their pupils’ recall of multiplication tables, and 86% stated that the associated increase in workload was not beneficial for their pupils’ learning. 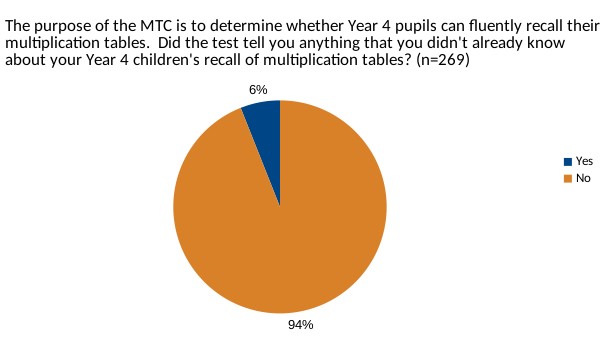 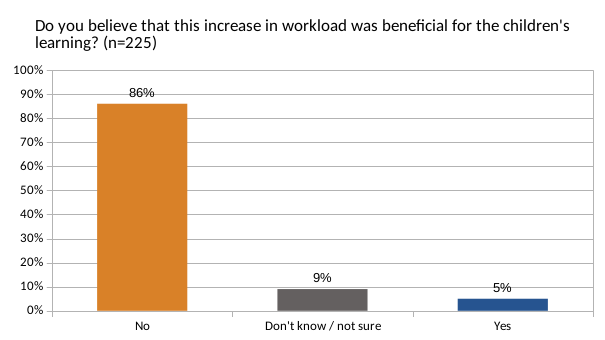 Tech was far from the only resourcing issue. Finding sufficient staff time for various aspects of the test was highly problematic:

Just 22% of participants did not experience any issues with the pilot.

As I have written about in the past, this constitutes yet another chapter in the Government’s push to marketise the education system in this country. Such pedagogically questionable, high-stakes tests are an easy way to quantify ‘progress’ (for a very narrow and, again, pedagogically questionable definition of ‘progress’), further entrenching the dominance of ‘competition’ between schools. Such competition inevitably leads to the ghettoisation of schools as those better-off families with the means to move to the ‘better’ schools do so. As less well-off pupils become concentrated in the ‘worse’ schools, the effects of deprivation take their toll on results, as the gap in results between them and the ‘better’ schools (who do not have to contend with children who are reliant upon foodbanks, or whose parents and carers have to work multiple precarious jobs) increases.

And this is not to speak at all of the effect that further increased high-stakes testing may have on pupils’ mental health. This means that, as of 2020, primary-school children will face high-stakes assessment in Reception, Year 1, Year 2 (possibly twice), Year 4 and Year 6, along with the associated narrowing of the curriculum in between tests that will naturally accompany such a régime in a system dominated by datafication and performance-related pay. The NAHT’s report gives several examples of otherwise-confident children freezing up or panicking, affecting their attainment in the pilot, made worse by the numerous technical problems and accessibility issues detailed above.

The NAHT have done valuable work here by exposing the serious flaws in the implementation of the Year 4 multiplication tables ‘check’, complementing the hard work of organisations such as More than a Score. It is now incumbent upon us as educationalists to stand against the rollout of this poorly implemented and irresponsible initiative that only furthers education policy that is already dominated by high-stakes testing.