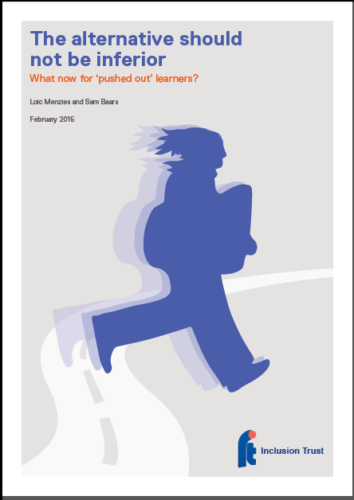 The alternative should not be inferior: What now for ‘pushed out’ learners?

Statistics released by the Department for Education last month reveal that only one percent of pupils in ‘alternative provision’ and PRUs (pupil referral units) achieved five good GCSEs in 2013-14 (A*-C including English and Maths). Furthermore, of those entered for a GCSE in Maths or English, only one-in-ten achieved a C or above.
A new report published today –“The Alternative Should Not Be Inferior: What now for pushed out learners?” focuses on these pupils and those that sit on the margins within mainstream schools and argues they are entitled to a high quality education designed around their needs. It concludes with nine key recommendations.

The report points out that ‘pushed out learners’ struggle to make the most of learning because of a combination of hunger, low literacy, innumeracy, poor social skills and unsafe conditions. Too often such challenges are used to explain failure whereas the report emphasises such learners can be ‘held’ if their needs are catered for properly. As Duza Stosic, Education Director of the award winning charity Kids Company explains:

Exactly these issues are highlighted in the current BBC Documentary ‘Excluded: Kicked out of school’ which follows the fortunes and struggles of pupils at London’s ‘Bridge Academy’, the executive head of which contributed to the report.

“The Alternative Should Not Be Inferior” – a report by the charity Inclusion Trust and think-and-action tank LKMco, draws together opinions from experts in the field and calls on schools and alternative providers to find innovative solutions that support England’s forgotten pupils. It concludes that rather than being a necessary evil, high quality alternative providers like City Gateway, Kids Company and TBAP (tri-borough alternative provision) have valuable expertise to offer and should work with the mainstream including through school clusters, multi-academy trusts and federations. Sam Baars, report co-author and Research Associate at LKMco points out that:

“We should recognise that Alternative Provision is capable of achieving excellence and is a crucial component of our education system. At the moment it is too often sidelined”

According to Maggie Kalnins, Chief Executive of the Inclusion Trust, in many cases ‘pushed out learners’ can be brought into the mainstream so long as schools work with specialist services. However in other cases, alternative providers can be valuable partners in the design and delivery of education that better caters for pupils’ needs and makes the most of their talents. The report warns schools not to be blind to hidden-need amongst pupils not eligible for the pupil premium, noting that disadvantage is not binary.

“The Alternative Should Not Be Inferior” draws together expert practitioners’ views including Dominy Roe of City Gateway, one of the charities featured in the Evening Standard’s ‘Ladder for London’ campaign, Anna Smee – Chief Executive of UK Youth and Peter Hughes, Head Teacher of Mossbourne Academy.

“Involving such an eclectic group of experts from different parts of the sector revealed some of the excellence that exists and showed that different pupils need varying levels of support in order to flourish.”

“Each of these approaches has its place but they need to be linked together and deployed appropriately so no pupil slips through the net.”

Bringing ‘pushed out learners’ into the mainstream structure

1.     Schools should ensure that pupils’ basic needs are met by working more closely with social and mental health services.

2.     Rather than focusing solely on those eligible for the pupil premium or with identified special needs, schools should be sensitive to the full range of factors that might lead to a pupil becoming a ‘pushed out learner’.

3.     Too often it takes the drastic step of exclusion to secure the resources and support that a ‘pushed out learner’ needs. Local authorities should be proactive rather than reactive in brokering support and funding.

4.     It is easier to focus on pupil needs in a safe, secure environment. Establishing this should be a top priority in all schools and be seen as a route to inclusion.

Innovating within the mainstream structure

5.     Pupils who are likely to find it difficult to adjust to the school environment should be carefully supported for example through nurture groups with lower pupil-teacher ratios. These groups should be staffed by the schools’ best teachers and should combine a focus on basic literacy and numeracy skills, core academic subjects and social, emotional and behaviour development. They should be highly responsive to pupils’ needs and prepare them to transition into the mainstream.

6.     Schools should embrace opportunities to ‘hook in’ ‘pushed out learners’ through innovative outside-school and extra-curricula activities that appeal to the passions and interests of the learners. These should be ‘ways in’ rather than alternatives and the emphasis should be on excellence – whether in debating, sport, art or ‘real-world’ learning.

Working outside of the mainstream structure

7.     All schools should develop strong relationships with alternative providers and share, rather than shift responsibility for the pupils they are unable to support. This could happen either through commissioning and accountability arrangements or by building school clusters, for example through federations and multi-academy trusts.

8.     Alternative providers should not overlook achievement in their pursuit of engagement. High expectations should be the norm.

9.     Alternative providers should be recognised as partners in delivery and valuable sources of expertise rather than a necessary evil.

The full report can be downloaded here