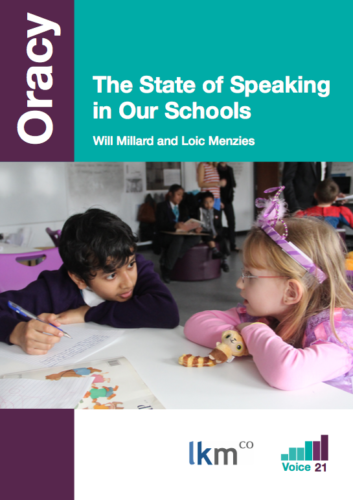 Oracy: The State of Speaking in Our Schools

In an exclusive interview for our new report on oracy, Professor Frank Hardman, argues that talk is:

“the most powerful tool of communication in the classroom and it is fundamentally central to the acts of teaching and learning”. 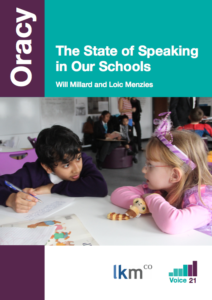 “The State of Speaking in Our Schools” was commissioned by Voice 21. It reveals that oracy (learning to talk well, and learning well through talk) provides an essential foundation for pupils’ academic and personal development.

Unfortunately it also finds that time pressures and prioritisation of other tasks (like writing) gets in the way of teachers using oracy to its full potential.

The report is the first of its kind. It presents exclusive new survey data from over 900 teachers across the UK, findings from 26 interviews and focus groups in 13 schools across the country, as well as 11 interviews with academics and teaching experts.

1. The importance of oracy

Teachers across the UK believe that oracy is critically important. Interviewees around the country consistently emphasised this point and over 68% of the 906 teachers who responded to a survey carried out by YouGov said it is ‘very important’ to develop pupils’ skills in relation to oracy during their lessons (63% say this of numeracy).

Teachers’ belief in the importance of oracy is backed up by a substantial body of academic evidence. For example, teachers are are well-aware that oracy is the bedrock of pupils’ language and communication and that it is vital for social and emotional development. Yet strikingly, despite the importance employers place on oral communication, less than a third of teachers (27%) believe it contributes ‘a great deal’ to pupils’ job prospects. On the other hand, primary and secondary pupils themselves frequently recognise oracy’s importance in relation to employablity.

Many teachers say they frequently use a range of strategies that have been shown to develop pupils’ oracy skills including:

However, they worry that support for oracy across different lessons, classrooms and schools is currently patchy. This matters because, as Professor Robin Alexander (an expert in the area) says:

“Children talk when they are prompted or invited, or enabled and encouraged to do so, therefore the teacher’s role in promoting talk is absolutely critical”

Schools are not consistently supporting oracy. Only 1 in 4 (27%) take into account pupils’ verbal contributions during lesson observations, and only 1 in 5 communicate with parents about their children’s progress in the area.

Opportunities for pupils to engage in oracy outside the classroom also tend to be limited simply to speaking in assemblies. This is worrying, since a large body of evidence shows that high quality talk should be promoted in a range of educational contexts and that it should underpin good teaching and learning across the board – not just in isolated silos.

On the other hand, our report also captures examples of the exciting work already taking place in many primary, secondary as well as special schools around the country. In particular, we highlight:

Time is the greatest barrier to better oracy provision. Nearly a third of teachers (31%) say this limits how often they initiate oracy-based activities.

Other constraints include the fact that:

Our report offers a series of solutions to these challenges. It also recommends actions that could raise oracy’s profile and the quality of provision.

Oracy: The State of Speaking in Our Schools will be launched at an event at the House of Lords on Tuesday evening. The report is being published in conjunction with the English Speaking Union’s (ESU) report, Speaking Frankly. Voice 21 is using these reports to inform its independent Commission on oracy, which will begin exploring ways in which schools can tap into oracy’s potential in the new year.

All figures, unless otherwise stated, are from YouGov Plc. Total sample size was 906 adults. Fieldwork was undertaken between 16th – 28th August 2016. The survey was carried out online.