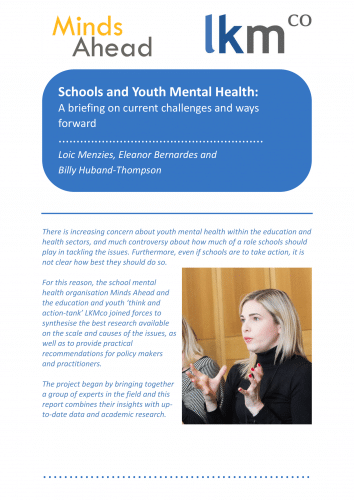 What Does It Take For A Child To Get Help With Their Mental Health?

In partnership with Minds Ahead

Our new report published today lays bare the scale and severity of the UK’s Youth Mental health crisis, showing that children in desperate need are being refused help. One young person was told a suicide attempt was ‘not serious enough’ for them to access support and another to put their ‘chin up’. 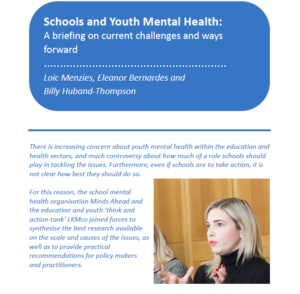 Our report, published with the school mental health organisation “Minds Ahead”  warns that despite the government’s increasing focus on mental health it is likely to miss its own targets for improved services due to patchy implementation, a severe lack of funding and a shortage of trained specialists.

“Schools and Mental Health”, argues that schools cannot, and should not avoid their role in tackling the crisis. The report calls for a new development programme to train mental health specialists to support young people with ‘pre-clinical’ needs within their school. It also calls for Ofsted to improve the way it inspects schools’ contribution to pupil wellbeing and for school leaders to be ‘true to their moral purpose,’ by prioritising pupil wellbeing above league table positions.

Former Secretary of State for Education Nicky Morgan MP has welcomed today’s report and called for “more emphasis to be put on wellbeing.” Meanwhile former Health Minister Norman Lamb MP described the report as “essential reading” and backed its call for PSHE (Personal, Social and Health Education) teaching in school to include a practical emphasis on learning to deal with stress and learning about healthy use of social media.

The report will be launched at a Westminster Briefings event attended by teachers, school leaders and policy makers. It highlights shocking figures showing that:

As part of this project we spoke to dozens of experts to understand the spiralling incidence of poor mental health amongst young people and what can be done about it. Research participants particularly highlighted:

What did we do? The Centre for Education and Youth has been working with STiR Education to identify the approaches most likely to support improved gender equity for school pupils and professionals. STiR Education is an international NGO that supports education systems in India, Uganda and Indonesia to reignite intrinsic motivation in teachers and officials. CfEY…

Today CfEY is launching a new report in partnership with the National Citizen Service, examining the role of non-formal learning (NFL) and extracurricular enrichment opportunities in supporting young people’s education recovery after the pandemic. NFL is a broad term for learning experiences that take place outside of a formal or academic setting – including: outdoor…

Our new report “A Space for Maths” warns that pupils face a “triple-whammy” of barriers to maths learning, putting their future life chances at risk Our new analysis shows the strength of the relationship between maths performance at Key Stage 2 and pupils’ eventual results at GCSE level – a connection that is stronger in…