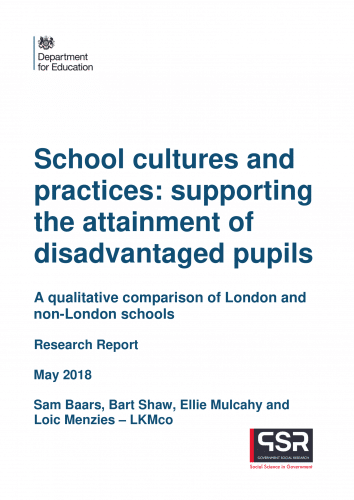 Inside the black box: how high-performing schools create a positive culture

In partnership with Department for Education

Anyone who has visited a range of schools soon notices the subtle but distinctive feel of different school cultures. Now, our latest research report, published today by the Department for Education, sets out in detail how these subtle differences can be pinned down in more concrete terms, and identifies the key practices that lie behind the distinctive culture of high-performing schools.

What are our headline findings?
Common practices amongst the cultures of high-performing schools (which we define as schools where disadvantaged pupils have consistently done well) include tapping into pupils’ ‘big dreams’ and using these as a stepping stone to success. For example, one school had invited in a footballer to explain that his passion for poetry meant that “when he stopped playing football he could now do whatever he wanted to do because he’d worked hard at school.” In contrast other schools simply sought to steer pupils away from their ‘idealistic’ aspirations.

Our report goes on to highlight the ambitious comparisons that leaders of high-performing schools make with other schools, for example comparing the attainment of their most disadvantaged pupils with the national average for all pupils.

We find that whilst inspirational mission statements on websites are common, in the high-performing schools we visited all teachers shared the school’s positive values and these even shaped parents’ expectations regarding children’s behaviour outside school.

We found that high-performing schools celebrated pupils’ successes at every opportunity, building this into the school timetable and actively including parents wherever possible. Meanwhile teachers and leaders continuously reinforced the school’s values on the playground, in corridors and in assemblies – not just in the classroom. Positive school cultures are therefore not accidental.

What did the research involve?
We visited 12 high-performing schools and 11 lower-performing schools around the country. The sample was designed to compare the cultures and practices of schools that achieve stronger and weaker results for their disadvantaged pupils, and also to compare schools inside and outside London. We conducted hundreds of interviews with senior leaders, teachers, governors and parents, and conducted focus groups with pupils who also completed a diary task. Crucially, we also spent hours observing dozens of classrooms, playgrounds and dinner halls, which allowed us to make detailed insights into schools’ cultures and practices, and how these are perceived and embodied by staff, pupils and parents.

Why does this report matter?
Our research design enabled us to pick out a series of distinctive features of high-performing schools’ cultures. Whilst these may not be the reason for the success of these schools, our report finally unpacks many of the ingredients that go into shaping what a school feels like and ‘how things are done around here’. As Louise Booth, head teacher at Beeston Hill St Luke’s Church of England Primary School – one of the schools involved in our study – said:

“Building a strong, positive school culture takes time and a very clear understanding of what we are trying to achieve. What does it mean to treat every child as if they were our own? What does ‘going the extra mile’ mean in day-to-day practice?

What else did we find out?

High-performing schools also worked hard to ensure a positive culture reached every corner of their school. For instance: